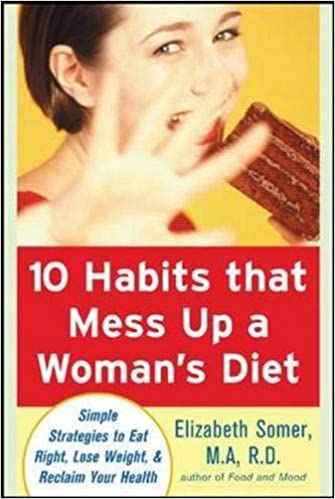 10 Habits That Mess Up a Woman’s Diet

In this first-of-its-kind book, Elizabeth Somer reveals to youwhat she's learned in more than 25 years on the front lines of nutrition research and counseling--the bad habits that stand in the way of successful weight loss. 10 Habits That Mess Up a Woman's Diet pinpoints the most common downfalls for women--from nibbling off a partner's plate, to soothing themselves with chocolate, to following the latest fad diet--and offers easy, everyday solutions.

The book includes real-life stories you'll identify with, and self-assessment tests so you can learn what you're doing wrong. Using checklists, menu plans, snacking tips, and other successful tricks, you can eat healthfully, lose weight, and turn your life around--one habit at a time.

Elizabeth Somer, M.A., is a registered dietitian and author of several books. She is an Advisory Board Member for Shape magazine, Editorial Advisor to Prevention, and has written more than 300 articles in numerous national magazines, including McCalls, Working Woman, Redbook, Sesame Street Parents, Ladies Home Journal, Self, Fit Pregnancy, Cosmopolitan, Better Homes & Gardens, Food & Wine. Somer appears frequently on NBCs Today (five times in 2004), was Nutrition Correspondent for Good Morning America (ABC) from 1995 to 1999 and for NBCs Later Today from 1999 to 2000. She is a regular guest on AM Northwest (Portland, OR) and has appeared on numerous other national shows, including Iyanla and The View. She also conducts selected media tours as a spokesperson for companies such as Orville Redenbacher Popcorn, the Milk Mustache Campaign, Post Cereals, Ponds Skin Care products, 8th Continent Soymilk, and Nature Made Vitamins.
No Review Found