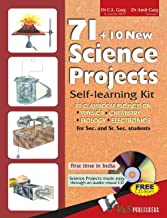 Do you have a project-assignment front your Physics teacher and do not know where to begin? Or, you have to participate in a science fair, and you wish to surprise everyone with a revolutionary Chemistry model? Or, you simply wish to experiment with new concepts of Physics, electronics, Biology and chemistry? This revised book and the free CD contains 71+10 New projects on Physics, Chemistry, Biology and Electronics. The purpose of the book and CD is to ensure simple explanations of these 81 Science Projects done by Secondary and senior secondary students. This book will be a useful guide in the preparation of project work for students participating in science exhibitions. At the end, the book features many additional projects to work upon. Highlights: making an automatic electric Alarm. Making a Railway signal. Making an Astronomical telescope. Producing electricity from potatoes. Making the Morse code.

Born on August 15 1940 . Dr C.L Garg did his post graduation and PhD in physics. He retired as a joint Director in 2000 from DRDO Ministry of Defence . He has to his credit more than a dozen books and 30 research papers published in national and international journals. He has received many awards and honours including First Indira Gandhi raj Bhasha Award and best science writer award by the National Council for child education. His Books Vichitra yantra manava and rokets and missiles in 2000 have been awarded by the DST and DRDO Respectively . He has presented amny science features , talks and programmes on AIR and TV.