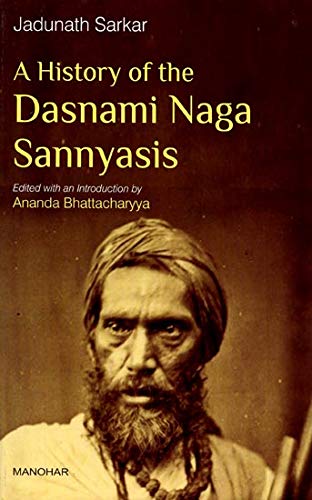 A History of the Dasnami Naga Sannyasis

Organized Naga military activity originally flourished under state patronage. During the latter half of the sixteenth century and the early part of the seventeenth century, a number of bands of fighting ascetics formed into akharas with sectarian names and identities. The Dasnami Sannyasis constitute perhaps the most powerful monastic order which has played an important part in the history of India. The cult of the naked Nagas has a long history. The present volume aims to explore new findings which are available in various archives and repositories in order to fill up the lacuna in Jadunath Sarkar’s work on the subject as elaborated in the present introduction.

Sir Jadunath Sarkar (1870-1958) was one of the greatest historians of Medieval and Modern India in the first half of the twentieth century. He was the author of such classic works as The Fall of the Mughal Empire (4 vols.); History of Aurungzib (5 vols.) and Shivaji and his Times. He taught at Patna University between 1899-1926 and was made Vice-Chancellor of Calcutta University in 1926.

Ananda Bhattacharyya is Assistant Director of the West Bengal State Archives. His many publications include Sir William Wilson Hunter: Bengal MS Records – A Selected List of 14,136 Letters in the Board of Revenue, Calcutta, 1782-1807, with an Historical Dissertation and Analytical Index, 4 vols (2018); A History of the Dasnami Naga Sannyasis (2018); Adivasi Resistance in Early Colonial India (2017); Remembering Komagata Maru: Official Reports and Contemporary Accounts (2016); Notes on the Races, Castes and Trades of Eastern Bengal (2016); Sannyasi and Fakir Rebellion in Bengal: Jamini Mohan Ghosh Revisited (2014); F.D. Ascoli: Early Revenue History of of Bengal and the Fifth Report, 1812 (2019) and Frederick Eden Pargiter: A Revenue History of the Sundarbans from 1765 to 1870 (2019).
No Review Found