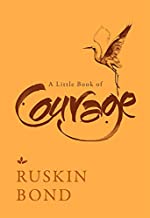 A Little Book of Courage

5
0%
0
4
0%
0
3
0%
0
2
0%
0
1
0%
0
Part of the bestselling ‘Little Book’ series, a new title by India’s favourite author Ruskin BondWhat can a flower teach us about courage? Or a little red ant?When is speaking up brave, and when holding one’s peace?Why must we look on with suspicion at all that comes easy? What is the ultimate measure of man?Ruskin Bond, India’s favourite writer, draws from his own experiences, and those of some of the world’s greatest thinkers and doers, to offer words of inspiration and wisdom. A Little Book of Courage is the perfect guide—to dip into and to gift—for the good times, and the tough.