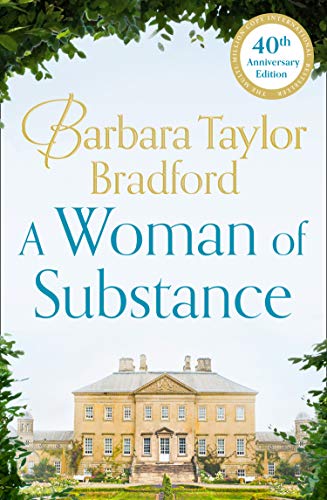 A WOMAN OF SUBSTANCE

With new Foreword from Fern Britton.

A WOMAN'S AMBITION…In the brooding moors above a humble Yorkshire village stood Fairley Hall. There, Emma Harte, its oppressed but resourceful servant girl, acquired a shrewd determination. There, she honed her skills, discovered the meaning of treachery, learned to survive, to become a woman, and vowed to make her mark on the world.

A JOURNEY OF A LIFETIME…In the wake of tragedy she rose from poverty to magnificent wealth as the iron-willed force behind a thriving international enterprise. As one of the richest women in the world Emma Harte has almost everything she fought so hard to achieve-save for the dream of love, and for the passion of the one man she could never have.

A DREAM FULFILLED-AND AVENGED.Through two marriages, two devastating wars, and generations of secrets, Emma's unparalleled success has come with a price. As greed, envy, and revenge consume those closest to her, the brilliant matriarch now finds herself poised to outwit her enemies, and to face the betrayals of the past with the same ingenious resolve that forged her empire.

Barbara Taylor Bradford was born in Leeds, Yorkshire, and was a reporter for the Yorkshire Evening Post at sixteen. By the age of twenty she had graduated to London's Fleet Street as both an editor and columnist.Barbara Taylor is the author of more than a hundred informational books for children. Barbara has won numerous awards, including the American Association of Physics Science Writing Award and the Geographical Association Gold Award. Kathryn S. Fuller is the World Wildlife Fund's President and C.E.O. In 1979, she wrote her first novel, A Woman of Substance, and that enduring bestseller was followed by 12 others: Voice of the Heart, Hold the Dream, Act of Will, To Be the Best, The Women in His Life, Remember, Angel, Everything to Gain, Dangerous to Know, Love in Another Town, Her Own Rules and A Secret Affair. Of these titles, ten have been made into television miniseries or are currently in production. Her novels have sold more than 56 million copies worldwide in more than 88 countries and 38 languages. Barbara Taylor Bradford lives in New York City and Connecticut with her husband, film producer Robert Bradford.
No Review Found
More from Author