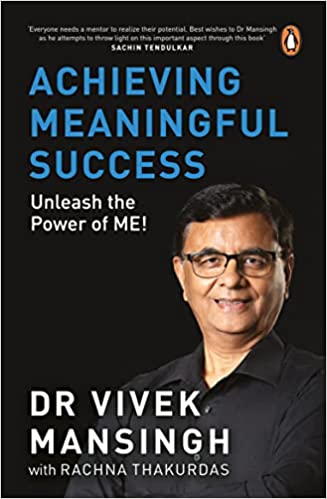 Achieving Meaningful Success: Unleash the Power of Me!

This book will be an adept lifetime mentor faithfully by your side to guide you through various stages of life. It guides you in achieving meaningful success including tremendous professional success through multidimensional and balanced life goals, which are the key to happiness and fulfilment. The book first focuses on defining the person you aspire to be through a step-by-step process to define your aspirational life goals. Then it guides you in becoming the best version of yourself and worthy of realizing your aspirations. The ideas shared are relevant to people of ages fifteen years onwards, from high school students to early and senior professionals to CEOs. It also includes insights from exclusive interviews with Ratan Tata, Narayan Murthy, Kiran Majumdar-Shaw, Sadhguru, John Chambers, Dr Devi Shetty, Rahul Dravid, Prakash Padukone, Vinita Bali, Vani Kola, and more. These distinguished people have achieved amazing success by passionately pursuing their goal-based journeys and have underlined the ideas shared in the book.

Dr Mansingh is a mentor par excellence and is in pursuit of "Mentoring A Million". He is a global leader, entrepreneur, author, technology visionary, innovator, international speaker and philanthropist. His mentoring strategies have helped thousands of people around the world. He had the privilege of working with David Packard, Bill Hewlett, Steve Jobs, Michael Dell and John Chambers. He is currently a GP at YourNest VC Fund and sits on the board of several global organizations. Previously, he served as president, Cisco & Dell R&D MD, Ishoni Networks (acquired by Philips) and Portal Software (acquired by Oracle). Before returning to India, he held management positions at HP and Fujitsu in Silicon Valley. He was also the founder of ATTI (Aavid) in the US. He is a Gold Medallist from NIT Allahabad, PhD from Queen's University, Canada, and EMBA at Stanford University. He has six US patents, and vital contributions to two technology books. He is listed in the National Who's Who of USA, received Chanakya Leadership Award, and IT Man of the Year 2016 from Enterprise Connect, USA. Rachna Thakurdas Singh has published several books. Her debut novel Dating, Diapers and Denial remained on the bestsellers stand for over a year. The New Indian Express hailed her as a 'part of the new wave of genuinely funny, smart and self-aware women writers in the country'.
No Review Found