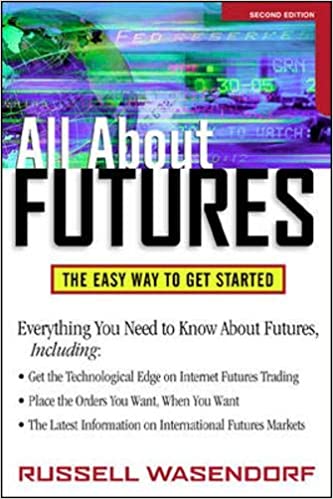 All About Futures: The Easy Way to Get Started

This title offers proven tips, strategies, and trading techniques. The classic futures trader's guidebook - updated for today's high-tech, global trading arena futures, by definition, are securities that provide protection against future price fluctuations. But it is the futures traders - individuals who seek only to profit from those price fluctuations - who create the volume necessary to drive the marketplace. "All About Futures, 2nd Edition" is for those traders.Today's most straightforward, honest explanation of the potential rewards and risks of futures trading, this all-in-one futures trader's tool - comprehensively revised and updated - describes everything you need to know to: understand the futures contract; know the types of orders and their uses; learn technical analysis concepts; locate the right broker; develop your own trading system; trade options on futures contract; master electronic day trading; employ arbitrage; and, trade profitably in up, down, and sideways markets. Successful futures trading requires the patience to wait for quality trading opportunities, the knowledge to study and understand the markets, and the discipline to control your emotions in the heat of high-stakes trading. Let "All About Futures" help you develop that patience, knowledge, and discipline - and show you the many ways futures can supplement your investment portfolio with both higher profits and added safety.

Russell R. Wasendorf Sr. (born 1948) is the former chairman and chief executive officer of Peregrine Financial Group, also known as PFGBEST, a futures commission merchant (commonly known as a commodity broker) that filed for bankruptcy protection in Chicago in July 2012. He was arrested in July 2012 following a suicide attempt. In September he pleaded guilty to embezzling $215.5 million from more than 13,000 customers over the course of 20 years. On January 31, 2013, he received a 50-year sentence for fraud, effectively a life sentence. Wasendorf is the author or co-author of six books about trading and futures, has been an investor in the BEST Direct Online Trading platform, and in 2001 founded SFO (Stocks, Futures, Options), an industry magazine that ceased publication in 2012. Wasendorf has engaged in charity work and won a number of awards for contributions to the community.
No Review Found