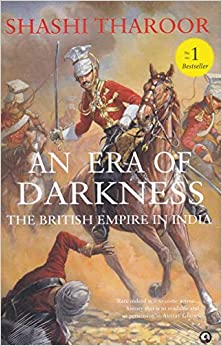 An Era of Darkness: The British Empire in India

British rule was for India. Besides examining the many ways in which the colonizers exploited India, ranging from the drain of national resources to Britain, the destruction of the Indian textile, steel-making and shipping industries, and the negative transformation of agriculture, he demolishes the arguments of Western and Indian apologists for Empire on the supposed benefits of British rule, including democracy and political freedom, the rule of law, and the railways. The few unarguable benefits—the English language, tea, and cricket—were never actually intended for the benefit of the colonized but introduced to serve the interests of the colonizers. Brilliantly narrated and passionately argued, An Era of Darkness will serve to correct many misconceptions about one of the most contested periods of Indian history.

Shashi Tharoor is the bestselling author of sixteen previous books, both fiction and non-fiction, besides being a noted critic and columnist. His books include the path-breaking satire the Great Indian Novel (1989), the classic India: From Midnight to the Millennium (1997) and most recently, An Era of Darkness: The British Empire in India, for which he won the Ramnath Goenka Award for Excellence in Journalism, 2016 for Books (Non-Fiction). He was a former Under Secretary-General of the United Nations and a former Minister of State for Human Resource Development and Minister of State for External Affairs in the Government of India. He is a two-time member of the Lok Sabha from Thiruvananthapuram and chairs Parliament’s External Affairs committee. He has won numerous literary awards, including a Commonwealth Writers’ Prize and was honoured as New Age Politician of the Year (2010) by NDTV. He was awarded the Pravasi Bharatiya Samman, India’s highest honour for overseas Indians.