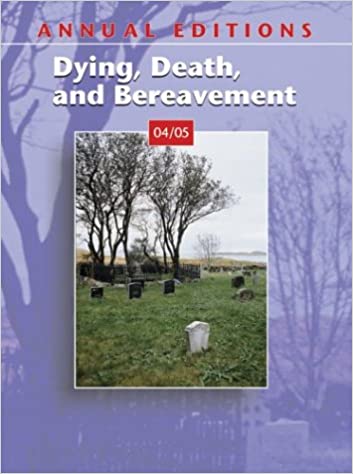 This informative anthology , now in its seventh edition, helps to provide an understanding of dying, death, and bereavement that will assist individuals in better coping with their own death and the death of others. These timely articles range from personal accounts to scientific and philosophical perspectives.

George E. Dickinson, a professor of sociology at the College of Charleston, South Carolina (USA), has been teaching courses on death and dying for over 40 years and has been actively involved as a hospice educator. Prior to coming to the College of Charleston in 1985, he taught in Pennsylvania, Minnesota and Kentucky. In addition to B.A. and M.A. degrees from Baylor University and a Ph.D. from Louisiana State University, he completed postdoctoral studies in gerontology at Pennsylvania State University, thanatology at the University of Kentucky School of Medicine and medical sociology at the University of Connecticut. He was a visiting research fellow in palliative medicine at the University of Sheffield's School of Medicine in England in 1999, the International Observatory on End of Life Care in the Institute for Health Research at Lancaster University in England in 2006 and the University of Bristol School of Veterinary Science's Department of Animal Behavior and Welfare in England in 2013. Dr. Dickinson has published approximately 100 articles in professional journals, primarily on end-of-life issues, and has co-authored other books with Michael Leming, as noted above. Additionally, with Brenda Sanders, he published AGING IN THE FAMILY (Taylor & Francis Publishers, 2019). Dr. Dickinson serves on the international editorial board of MORTALITY (UK) and on the editorial review board of the AMERICAN JOURNAL OF HOSPICE & PALLIATIVE MEDICINE (US). His honors include the 2003 and 2008 South Carolina Governor's Distinguished Professor Awards and the 2009 Death Educator Award from the Association of Death Education and Counseling. From the College of Charleston, he received the 2002 Distinguished Teacher-Scholar Award and the 2008 Distinguished Research Award, and in 2018 he was the first recipient of the REACH program's Professor Recognition Award.

Michael R. Leming, a professor emeritus of sociology and anthropology at St. Olaf College in Minnesota (USA), taught courses on death and dying for over 35 years. For nearly 20 years, he also directed the Spring Semester in Thailand, a program affiliated with Chiang Mai University. In addition to his B.A. from Westmont College, M.A. from Marquette University and Ph.D. from the University of Utah, he has done graduate study at the University of California at Santa Barbara. Dr. Leming is co-editor (with George E. Dickinson) of ANNUAL EDITIONS: DYING, DEATH AND BEREAVEMENT, 15th edition (McGraw-Hill, 2017) and co-author of UNDERSTANDING FAMILIES: DIVERSITY, CONTINUITY, AND CHANGE (Allyn & Bacon, 1990; Harcourt Brace, 1995). He is also co-editor (with Raymond DeVries and Brendan Furnish) of THE SOCIOLOGICAL PERSPECTIVE: A VALUE-COMMITTED INTRODUCTION (Zondervan, 1989; Wipf & Stock Publishers, 2009). In 1995 Dr. Leming produced the documentary film The Karen of Musikhee: Rabbits in the Mouth of the Crocodile". His most recent film project was a documentary on the Karen produced by the BBC, for which he was the chief research consultant. The founder and former director of the St. Olaf College Social Research Center, Dr. Leming is a former member of the board of directors of the Minnesota Coalition on Terminal Care and the Northfield AIDS Response, and he has served as a hospice educator, volunteer and grief counselor. During Minnesota's coldest months, he lives in Thailand."
No Review Found