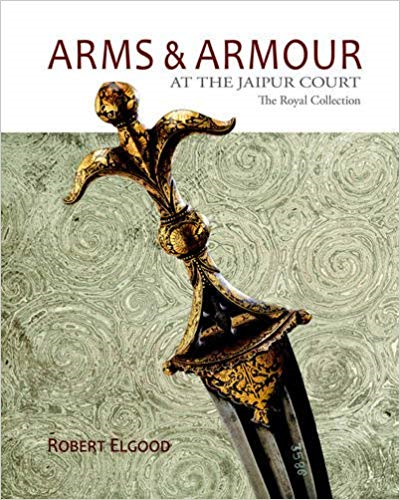 Arms & Armour: At the Jaipur Court: The Royal Collection

The book has a selection of 186 of the most interesting arms in the Jaipur royal palace and discusses them as weapons in their social and historical context. The book breaks new ground in Indian arms scholarship and is also a very readable account that takes in Rajput, Mughal and British Indian history, anthropology and art history. The objects are stunning: swords belonging to the Mughal Emperors Jahangir, Shah Jahan and Aurangzeb, wonderful court daggers with hilts of carved rock crystal, jade, ivory and gilt steel, ferocious tribal arms, some remarkable historic firearms and beautiful painted shields, some of which were decorated in Japan for the Mughal court. There is even a device for extracting arrows from wounds with toe-curling ancient medical remedies. Most of these arms are from the reserve collections and published for the first time.

Robert Elgood, an expert on the historic arms of Hindu India and the Islamic world, has lectured and worked in many countries. He is the author or editor of numerous books, the major ones being Islamic Arms and Armour (1979), Arms and Armour of Arabia (1994), Firearms of the Islamic World in the Tareq Rajab Collection, Kuwait (1995), Hindu Arms and Ritual (2004), The Arms of Greece and her Balkan Neighbours in the Ottoman Period (2009), Arms and Armour at the Jaipur Court (2015) and Rajput Arms and Armour: The Rathores and their Armoury at Jodhpur Fort (2017). He has a BA from SOAS in Islamic History and a DPhil in Indian Anthropology from Oxford. He has worked at Sothebyâ€™s and the Wallace Collection and as a guest scholar or consultant at various major museums. He is an independent consultant and a Fellow of the Royal Asiatic Society, London and the Society of Antiquaries.
No Review Found
More from Author