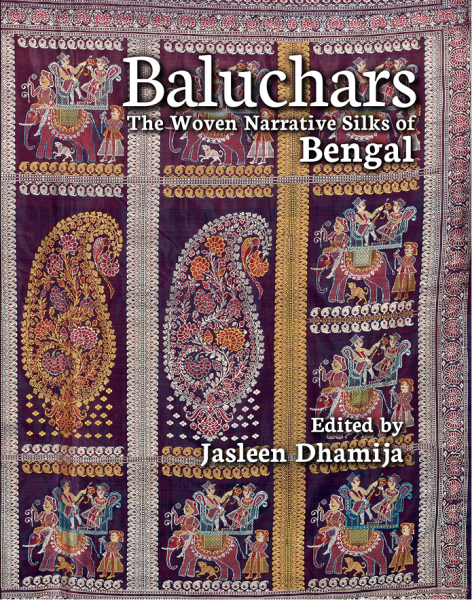 The historic Baluchar textiles of Bengal are a testament to a unique weaving tradition. Composed of the finest silk, these textiles were painstakingly woven with intricate figurative and decorative patterns. They represent more than just a textile tradition. They are a window into the socio-cultural set-up of the eighteenth and nineteenth centuries. The transition from Nawabi to colonial rule in Bengal has been beautifully captured through these textiles. This richly illustrated book traces the historical development of Baluchar textiles, especially saris, and the position this art form has come to acquire in the twenty-first century. By dissecting the conditions, inspirations, materials, techniques and aesthetic qualities of this weaving tradition, this book showcases how this art form travelled from Murshidabad to Bishnupur, then to Benares as well as to museums around the world.  The book has been recently shortlisted for the R.L. Shep Ethnic Textiles Book Award founded by the Textile Society of America.

Jasleen Dhamija is internationally renowned in the field of world textiles and costumes. She has been studying, documenting and reviving Indian textile and handicraft traditions for nearly six decades. She began working for the development of handicrafts and handlooms in India from the 1950s. She also worked with the United Nations in Iran, Central Asia, in twenty-one African countries, the Balkans, South Asia and South East Asia. She was President of the Jury for UNESCO’s Award for Creativity in Textiles and Co-Chairperson of the Handloom Development Working Group of the Planning Commission (12th Plan). She has curated major exhibitions related to textiles and crafts in different parts of the world. She has authored and edited several articles and books related to both Indian and world textiles and handicrafts. She was also consultant to World Bank and to various international NGOs.
No Review Found
More from Author