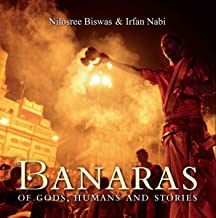 BANARAS Of Gods, Humans and Stories

A cascading effect of events unravels in Banaras: on its ghats and in its lanes. Myriad lanes emerge like an umbilical cord out of the ghats to the womb of the sacred geography, to the infinite spots where the believers pause to experience the divine. Its waterfront, a grid of staircase leads one’s vision up and the eye meets a world that is frantic of the mundane and magnum opus, a scene that appears chaotic yet in sync.

In Banaras: Of Gods, Humans and Stories, Nilosree and Irfan discern the engaging narrative of a unique chromosome that makes Banaras. Traversing within the maze, its sacred topography, craft traditions, and gastronomic plethora, the book examines the tenets of its weave. There is a singular, unified, and unstoppable momentum to all this—akin to the unfolding of a scroll of a painting.

‘A lovingly-written and profoundly personal meditation on the City of Light in all its different dimensions and avatars. Vaulting from mythology to history and back through the ancient scriptures and epics to the living landscape, this is a warmly affectionate love-letter to the holiest of all Indian cities.’

‘Banaras, as Nilosree Biswas reminds us, is a maze. ...in its wonderfully diverse mythologies, histories, and peoples. The abode of gods is also home to aarti pujas and traders’ boats that the Ganga hosts, the music of bhajans and breezy kajris, and more. Biswas and photographer Irfan Nabi usher us into this world with the deftness of their craft, helping us gain our bearings in this maze, where sacred Kashi and profane cash are always opposed yet intimate.’

Nilosree Biswas is an author and filmmaker who was trained in Comparative Literature, Jadavpur University, Kolkata, and later in cinema. Her interests include history, cultural studies of pre-modern, colonial South Asia, and early Hindi cinema. Her works, both film, and writing have appeared in various print media and screened worldwide including at Cannes Film Festival. Broken Memory, Shining Dust, her prominent documentary, has been archived by Oscar Library. Her earlier book also co-authored with Irfan Nabi—Alluring Kashmir: The Inner Spirit—has found a home in the Library of Congress. Currently, she is working on her next book on food stories during British rule in India. Irfan Nabi studied in the prestigious Irish Catholic Burn Hall School in Kashmir. He photographs often and writes intermittently; his images have been part of major exhibitions in Amsterdam, Washington, Kolkata, and New Delhi among many other cities around the globe. He has shot and traveled solo across various terrains. Indulgence in food and music is what keeps him going in his spare time. A book on Ladakh is in progress. Culturally nuanced photo elements are what his lens seeks.
No Review Found