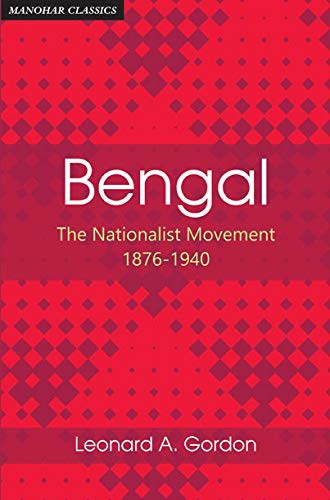 Nationalism in India developed unevenly in different regions and drew upon varied cultural traditions and diverse socio-political conditions. This work analyses the interplay of Indian nationalism and Bengali regionalism from the later nineteenth century to 1940 in one of India`s most troubled areas.

As large in population as France and Germany combined, Bengal has always been an area of major importance in the Indian subcontinent. Calcutta, its principal city, was the capital of the British Indian Empire for nearly a century and a half, during which time it grew considerably in size and influence as a centre of both government and business. Thus by reason of proximity the Bengali people were more closely involved with British rule than any other specific group in India. They also had more opportunities for education and developed a greater political awareness. Today the region is split into West Bengal, which is part of India, and Bangladesh, which was formerly part of Pakistan. This division, largely along Hindu/Muslim lines, was made at the end of British rule in 1947. The total population now is well in excess of 115 million and there is a great deal of both national and regional consciousness in both parts of Bengal.

Based on nationalist sources, government records, and interviews, the present volume traces the emergence of professional politicians attempting to mobilize the masses, and revolutionaries devoted to violent upheaval. A general account of the national movement in Bengal is interwoven with detailed portraits of such important leaders as R.C. Dutt, Aurobindo Ghose, C.R. Das, and Subhas Bose.

Politically-conscious Bengalis passed from early pre-eminence in the movement to a much more limited role once Mahatma Gandhi gained control over the Indian National Congress. The final and longest section of the book deals with the years from 1918 to 1940 when Bengal was out of step with the main line of the Gandhian movement, and examines Bengali ambivalence and hostility toward Gandhi and Gandhians. The two major revolts against Gandhi`s leadership in these years were led by C.R. Das in the 1920s and Subhas Bose in the 1930s. These crises of national movement versus regional sentiment are analysed to clarify the cultural, political, and psychological factors in the Bengalis’ position. It is essential to see these historical roots, Professor Gordon feels, if one is to understand the conflicts in which the Bengalis have recently been and are now engaged.

Leonard A. Gordon’s Bengal: The Nationalist Movement, 1876-1940 was awarded the Watumull Prize by the American Historical Association. His Brothers against the Raj: A Biography of Indian Nationalists Sarat and Subhas Chandra Bose was published in 1990. Co-editor of The Sources of Indian Traditions, 1700-present, he taught at Columbia University and the City University of New York from 1967 to 2002. Since 1985 he has been director of the Taraknath Das Foundation.
No Review Found
More from Author