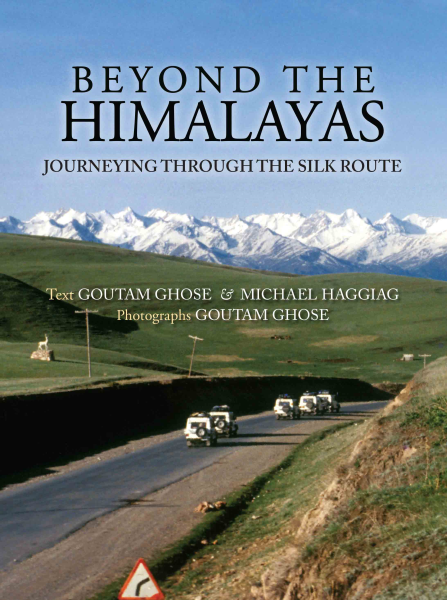 Beyond The Himalayas: Journeying Through The Silk Route

Filmmaker Goutam Ghose was part of the Central Asian expedition organised by Major H.P.S. Ahluwalia in 1994, the first of its kind. They undertook an arduous 14,000 km journey through Central Asia, China and Tibet tracing the ancient trade route. Ghose captured this once-in-a-lifetime adventure as a five-part series in his film Beyond the Himalayas (1996). This film book is a pictorial chronicle of Ghose’s incredible experience on the Silk Route. Much of the text is the narration of the original soundtrack of the series which has been adapted for the benefit of book readers. His lens captures breathtaking visuals of a less travelled road. The tapestry of history, travel anecdotes, local legends and titanic characters lend a cinematic quality to the whole narrative. The fabled past and the present are intercut by cinematic jumps in this fascinating record of an enduring memory in the collective consciousness of the history of mankind.

Goutam Ghose launched into documentaries, group theatre and photo journalism in 1973. His documentary, Hungry Autumn won him the main award at the Oberhausen Film Festival. Since then Ghose has produced several documentaries on personalities like Ustad Bismillah Khan, Satyajit Ray and HH Dalai Lama, in addition to ten feature films and a number of advertisement, corporate and short films. He has won fifteen National Awards, besides Filmfare Awards and a number of international awards like Silver Balloon, Nantes Film Festival, UNESCO Award at Venice, Golden Semurg at Tashkent, Fipresci Award and Red Cross Award at Verna Film Festival. He is the only Indian to win the coveted Vittori Di Sica Award and was awarded the Knighthood of the Star of Italian Solidarity in 2008.
No Review Found
More from Author