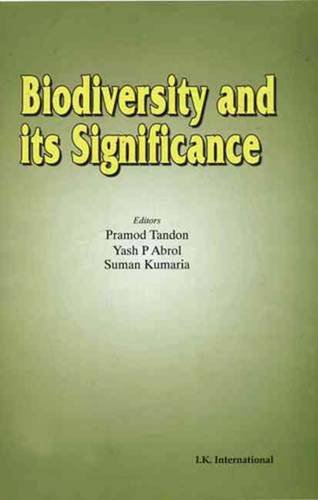 Biodiversity and its Significance

Biodiversity and its Significance deals with the various fundamental aspects of biodiversity, which have a direct and strong impact on human beings and their environment. It comprises 20 articles contributed by renowned experts in their areas. This pioneering book has been designed for the students and research scholars of Plant Sciences, Agricultural Science and Bioinformatics.

Vice Chancellor, North Eastern Hill University (NEHU), was formerly a professor in Jodhpur University. He has worked as post-doctoral fellow in the department of Molecular Biology and Biochemistry at the University of California, Irvine, USA, during 1970-80. During 1989 to 1995, he was associated in collaborative research with several Universities and National Institutes of Aerobiological Resources in Japan, leading to a long-term collaboration on Plant Conservation Biotechnology. He has published a number of research papers and articles in Journals of both National and International repute. He has edited three books on biodiversity and biotechnology. Besides being a member of many Academic bodies and national Task Forces, Prof. Tandon is a fellow of the National Academy of Sciences and the Indian Botanical Society. He is the recipient of several awards and recognitions, notably the B P Pal National Environment Fellowship Award on Biodiversity, Ministry of Environment and Forests, Government of India, and Professor Panchanan Maheshwari Medal Award of the Indian Botanical Society.

Suman Kumaria is Reader in the Department of Botany, North-Eastern Hill University, shillong. She obtained her Ph.D degree from North-Eastern Hill University, Shillong. She has been a recipient of merit scholarships during her studies. Dr. Kumaria has an experience of 20 years in plant Biotechnology research. She has been engaged in postgraduate teaching for the past 10 years. Dr. Kumaria has published research papers and articles in journal/books of National & International repute. She is a fellow of the International Society for Conservation of Natural resources, besides being a member of various academic bodies.

Former head of the Division if Plant Physiology, Indian Agricultural Research Institute, New Delhi. Prof. Abrol has worked as Emeritus Scientist (CISR). Senior Scientist (Indian National Science Academy) and is presently Adjunct Professor and Honorary Scientist at Indian National Science Academy. He obtained his Ph.D degree from the University Of Chicago (USA) and worked as a Post-doctoral Fellow at the University of California, Davis. He has seen National Fellow (ICAR) from 1978-84. He has profusely published research/review articles in International and National Journals, besides editing a number of books/proceedings. His area of interest include climate variability/change in Agriculture; Land Use/Cover Change. Nitrogen Utilization/ Metabolism in crop plants. He is a Fellow of the Indian National Science Academy; Indian Academy of Sciences, National Academy of Sciences and National Academy of Agricultural Science. Prof. Abrol received several awards notably Dr. R D Asana Award, Sukumar Basu Award, VASVIK, and FICCI Award.
No Review Found