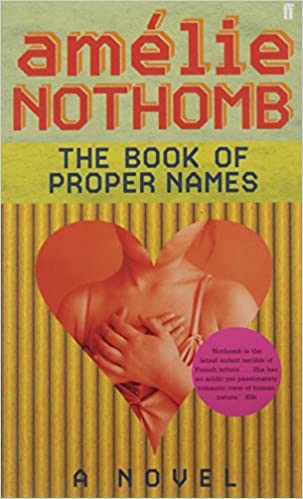 From France's 'literary lioness' (Elle), The Book of Proper Names is the story of the hapless orphan girl, Plectrude. Raised by her aunt, and unaware of the dark secret behind her past, she is a troubled but dreamy child who is both blessed and cursed by her intoxicating eyes. Discovered to have enormous gifts as a dancer, she is accepted at Paris's most prestigious ballet school where she devotes herself to artistic perfection, until her body can take no more. In a brilliantly succinct story of haunted adolescence and lost mothers, Nothomb propels the narrative forward until Plectrude is forced to take command of her own fate. Vintage Nothomb, The Book of Proper Names marks the UK debut of one of the most brilliant, ambitious, and idiosyncratic voices to have emerged in years. 'Slyly outrageous. [Nothomb] both disturbs and amuses.' New York Times 'Readers who have yet to discover the feather-ruffling pleasures of reading popular Belgian author Nothomb, winner of the Prix du Roman de l'Academie Francaise and other prizes, should jump at the chance.' Kirkus Reviews

Belgian by nationality, AmÃ©lie Nothomb was born in Kobe, Japan, and currently lives in Paris. Described by Time Magazine as 'prolific and ingenious', she is the best-selling author of numerous novels, translated into over thirty languages, including Fear and Trembling which won the Grand Prix of the AcadÃ©mie FranÃ§aise and the Prix Internet du Livre, and The Book of Proper Names which has sold over 250,000 copies in France.
No Review Found