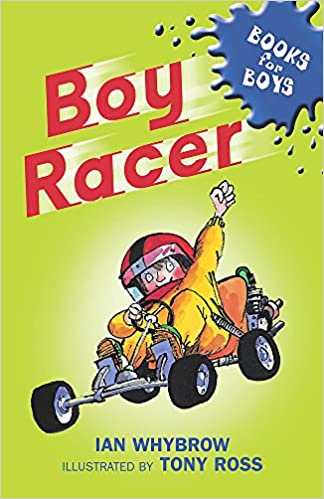 Henry's mum and dad think his new friend Gary is BAD NEWS. But Dad's got worse problems at work. If he doesn't win the charity go-kart race, he might lose his job! There's trouble ahead, that's for sure. But nobody reckons on a mystery boy racer who turns up at the track. He's got a surprise in store for everyone ...

From football to go karting, and real heroes and aliens, Books for Boys are packed with high action, adventure and humour, ideal for turning reluctant boy readers into lifelong bookworms. Ideal for fans of HARRY AND THE DINOSAURS who are ready to move on to chapter books.

Ian Whybrow has lived in Kent, various places in London and as far afield as Hong Kong and New York. The most important thing to him in his writing is that it reads aloud brilliantly and that there is something in it for everyone. Tony Ross was born in London and studied at the Liverpool School of Art and Design. He has worked as a cartoonist, a graphic designer, as the Art Director of an advertising agency, and as Senior Lecturer in Art at Manchester Polytechnic. Tony is one of the most popular and successful children's illustrators of all time, best known for illustrating Horrid Henry and the works of David Walliams. Tony's books have been translated into 40 languages in over 100 countries. He lives in Macclesfield.
No Review Found