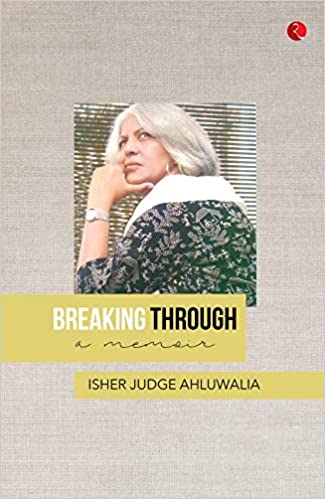 BREAKING THROUGH: A Memoir

This is the life story of Isher Judge Ahluwalia, one of the leading Indian policy economists of her generation. Born into a family with eleven children and limited means, where she was one of the first to attend university, she takes us through her journey to Presidency College, Delhi School of Economics and Massachusetts Institute of Technology.

She chronicles her career as a young policy economist fighting against the Indian economic orthodoxy that underpinned the license-permit-quota Raj, as an institution builder leading the Indian Council for Research on International Economic Relations (ICRIER), one of India's leading economic think tanks for over a decade, and also her most recent role in focusing attention on the challenges of urbanization in India.

Narrated with candor and from the heart, this is also a story of a woman balancing career and family, and trying to stay close to her roots as her life path takes her through the power corridors of New Delhi, both through her own career, and through a 50-year-marriage to Montek Singh Ahluwalia. An outsider to Delhi, who ultimately became the consummate insider, Breaking Through is an account of a remarkable life that was witness to remarkable times.

ISHER JUDGE AHLUWALIA is an economist who has spent a lifetime in research related to economic policymaking in India. After starting her career at the IMF, Dr Ahluwalia returned to India where she authored two books—Industrial Growth in India: Stagnation since the Mid-Sixties and Productivity and Growth in Indian Manufacturing. She was a professor at the Centre for Policy Research, and then director, and later chairperson, of ICRIER. Over the last decade and a half, she has built ICRIER into a leading global think tank. Dr Ahluwalia has served as Chair of the Board of the International Food Policy Research Institute and the Chair of the High-Powered Committee on Urban Infrastructure Services set up by the Government of India in 2008. She has written extensively in The Indian Express on several challenges relating to sustainable urbanization with special focus on delivery of clean drinking water and solid waste management. She is a graduate of Presidency College and Delhi School of Economics, and received her PhD from Massachusetts Institute of Technology. Dr Ahluwalia is a recipient of the Padma Bhushan.
No Review Found