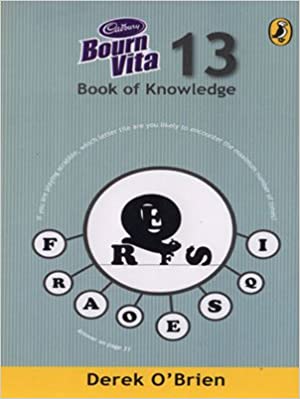 Questions from your favourite TV quiz show, now in twelve revised and updated volumes Since 1993, the Cadbury Bournvita Quiz Show, hosted by the inimitable Derek O'Brien, has been a regular feature on television. Now, for the first time, the fully revised and updated Bournvita Book of Knowledge Volumes 1??"11 are brought to you by Puffin in a brand new format, with over a hundred bonus questions. Watch out for fun sections like Speed Round, Find the Answer, Take your Pick, Guess the Question and sharpen your general knowledge by answering questions on sports, history, entertainment, wildlife and several other topics. Bournvita Book of Knowledge Volume 12 is the latest addition to the series, with completely new questions and sections. So collect all twelve volumes??"and happy quizzing!

Derek O'Brien is a twice-serving member of the Rajya Sabha from Bengal, representing the Trinamool Congress. He is national secretary and chief national spokesperson of his political party, as well as leader of the Trinamool Congress' parliamentary party in the Upper House. O'Brien has spoken at Harvard, Yale and Columbia Universities, and several IIMs, IITs and other premier educational institutions in India.