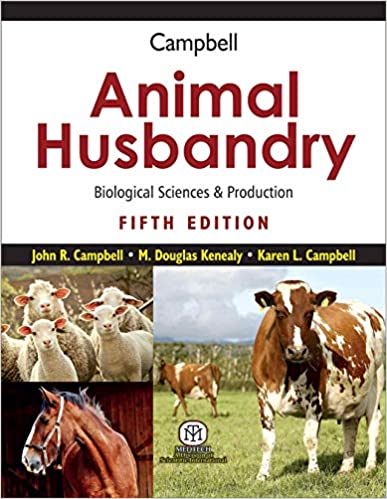 This textbook is intended as a comprehensive introduction to the biology, care, and production of domestic animals and freshwater fish raised to provide food, as well as pets kept for companionship and recreation. The authors' teaching and research experiences in agriculture, animal and dairy sciences, and veterinary medicine provide the professional expertise that underpins the clearly written discussions of advances in animal sciences affecting humans globally. Coverage includes breeds and life cycles of livestock and poultry; nutritional contributions of animal products to humans; the principles of animal genetics, anatomy, and physiology including reproduction, lactation, and growth; animal disease and public health; and insects and their biological control.

Each chapter stands on its own. Instructors can assign higher priority to certain chapters and arrange topics for study in keeping with their preferred course outlines. The text has been classroom-tested for four decades in more than 100 colleges and universities at home and abroad. Additionally, it is pedagogically enhanced with glossary terms in boldface type, study questions at the end of each chapter, more than 350 illustrations, and historical and philosophical quotations. These useful features aid students in comprehending scientific concepts as well as enjoying the pleasures derived from learning more about food-producing animals, horses, and popular pets.

Dr. John R. Campbell earned three degrees and was conferred an honorary DSc from the University of Missouri where he taught and conducted research for two decades before serving as Dean of Agriculture at the University of Illinois and as President of Oklahoma State University. He team-taught the first comprehensive, introductory animal sciences course at the University of Missouri. Dr. Campbell authored four and co-authored three other books and has received numerous teaching awards among other honors (e.g., serving as President of the American Dairy Science Association). But the honor from which he derived the greatest personal pleasure is that of having been given the privilege to participate in the learning experiences of more than 12,000 young people (mostly students of animal sciences, pre-veterinary medicine, and agricultural education).

Dr. M. Douglas Kenealy received a PhD in Animal Nutrition (Animal Science) and Physiology (Zoology) from Iowa State University. He then served a short time in the US Army followed by an industry position as an animal nutritionist. Dr. Kenealy returned to Iowa State University on a primary teaching assignment. During his career he has introduced over 13,000 undergraduates to the animal sciences. Kenealy currently serves as Professor in Charge of Dairy Science and Section Leader for Animal Science Teaching. He holds honorary faculty positions at the National Agriculture University of Ukraine and Trakia University in Bulgaria. Dr. Kenealy received the 2009 Fellow award in teaching from the American Society of Animal Science and a 2009 national USDA - FAS Excellence in Teaching Award.

Dr. Karen L. Campbell was first introduced to animal sciences on her grandparents dairy farms. She majored in animal science at the University of Missouri where she also completed a DVM degree with highest honors. She studied veterinary internal medicine, surgery, and clinical pathology at Auburn University and the University of Georgia. She is board-certified as a specialist of veterinary internal medicine and of dermatology. She has been teaching at the University of Illinois College of Veterinary Medicine since 1983. Dr. Campbell has published over 100 scientific papers, 23 book chapters, and given numerous lectures domestically and globally. She has authored six textbooks and served in various professional offices including President of the American College of Veterinary Dermatology.