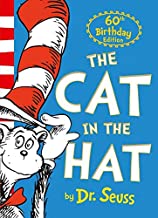 Cat in the Hat,The:Dr. Seuss

5
0%
0
4
0%
0
3
0%
0
2
0%
0
1
0%
0
The one and only Cat in the Hat from the iconic Dr. Seuss gets a brand new look for his 60th birthday, introducing his roller-coaster ride of mayhem to a new generation of readers. The iconic Cat in the Hat from the one and only Dr. Seuss, now with a special celebration look for it’s 60th birthday! When Sally and her brother are left alone, they think they're in for a dull day – until the Cat in the Hat steps in on the mat, bringing with him mayhem and madness! This is the classic book that every child should have the joy of reading. The wonderfully anarchic Cat in the Hat is one of the most popular characters in children’s fiction, and this book is ideal for budding readers to tackle on their own.