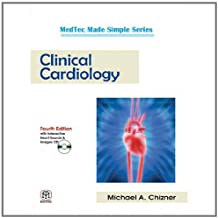 This book of Dr. Michael Chizner’s in an excellent contribution to help reemphasize the necessity of using the “five finger” clinical method of evaluation of our patients. It is refreshing, to say the least. Make sure to pay close attention to athe large number of valuable cardiac “pearls” he presents, which can be immediately applied for diagnosis and evaluation, as well as to the excellence in care for our patients”.

Michael A. Chizner, M.D. is a nationally renowned cardiologist and Chief Medical Director of The Heart Center of Excellence of Broward Health, one of the nation largest health care systems based in Fort Lauderdale, Florida. He is a Clinical Professorof Medicine at the University Of Florida College Of Medicine, the University Of Miami Miller School Of Medicine, Nova Southeastern University College of Osteopathic Medicine, the Charles E. Schmidt College of Medicine at Florida Atlantic University, and Barry University. Dr. Chizner graduated with highest honors from Cornell University Medical College, where he was selected a member of the Alpha Omega Alpha National Medical Honor Society. He received his residency training in Internal Medicine at the New York Hospital-Cornell Medical Center, and his cardiology fellowship training with legendary cardiologist, W. Proctor Harvey, M.D., at Georgetown University, where he was the recipient of the Distinguished Alumnus Award. Dr. Chizner is a Diplomate of the American Board of Internal Medicine and the sub-specialty Board of Cardiovascular Disease. Among the many awards and accolades he has received, Dr. Chizner has earned the distinction of being named one of America Top Doctors by both U.S. News & World Report and Castle Connolly Medical, Ltd, an honor bestowed upon only 1 % of physicians nationwide. As physician, author, editor, and teacher, Dr. Chizner has contributed greatly to the practice of cardiology and the advancement of medical education. He has written and edited numerous articles, monographs, and books that have become standards in cardiovascular education, and are now being used in medical schools throughout the United States and abroad. Dr. Chizner has served on the editorial advisory boards of national cardiology journals. He has also been director, lecturer, and keynote speaker at continuing medical education conferences and has been involved in the instruction of medical students, physicians, nurses, and other healthcare professionals at a variety of levels. In addition to the practice and teaching of cardiology, Dr. Chizner has spearheaded the establishment of The Heart Center of Excellence at Broward General Medical Center, a world-class facility dedicated to the fight against heart disease and committed to the advancement of medical education, clinical research, and the delivery of the highest quality of compassionate, state-of-the-art patient care. As director and founder, Dr. Chizner refined the mission and vision of the heart center. He recruited an exceptional roster of cardiologists and cardiovascular surgeons, whose clinical expertise, superior outcomes, and strongly positive patient satisfaction ratings earned Broward General the reputation as the only high performing hospital for cardiology and heart surgery in the region, according to U.S. News & World Report. In recognition of his outstanding achievements, Dr. Chizner received a gubernatorial appointment to the Florida Board of Medicine, where he was elected unanimously by his fellow board members as Chairman of the Board.
No Review Found