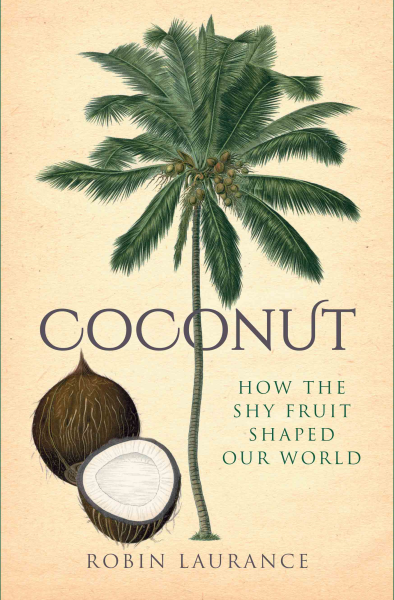 Coconut: How The Shy Fruit Shaped Our World

Coconuts have been around for longer than Homo sapiens; they have been turned into art, taken part in religious rituals and been a sign of wealth and success. They have saved lives, not only by providing nourishment, but also as part of the charcoal filters in First World War gas masks. It was coconuts that triggered the mutiny on the Bounty, and coconuts that saved the life of the man who went on to become the 35th President of the United States. The coconut has long been the unseen player in the endeavours of industrialists and bomb makers, physicians and silversmiths, smugglers and snake charmers. To this day, coconuts shape the lives of people around the world.

At a time when coconut products crowd the shelves of supermarkets, health food shops and beauty salons, Robin Laurance looks beyond the oils and health drinks to uncover the unexpected, often surprising, and vital roles played by the coconut palm and its nut in times past and present.

Robin Laurance is a writer and photographer whose work has been widely published in newspapers and magazines, both in the UK and in America. He began his career with The Guardian newspaper in London before turning freelance and contributing to The Times, The Sunday Times, The New York Times, Washington Post, Business Week and Forbes magazine. His previous books include Just What I Always Wanted! (Quercus), The Millennium Generation and Portrait of Islam (both Thames & Hudson). Reviewing a previous book, the Times Educational Supplement referred to Laurance as ‘that rare breed of genuine photojournalist with a talent for telling stories in photographs and words.’