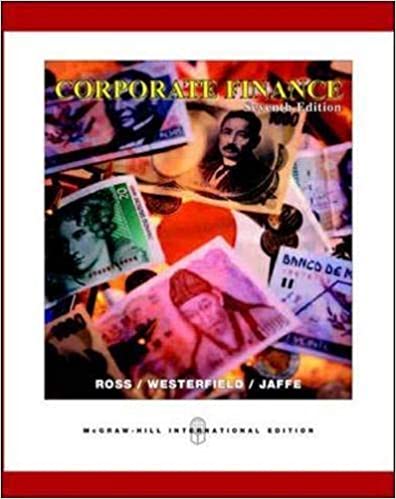 Corporate Finance, by Ross, Westerfield, and Jaffe is a popular textbook that emphasizes the modern fundamentals of the theory of finance, while providing contemporary examples to make the theory come to life. The authors aim to present corporate finance as the working of a small number of integrated and powerful intuitions, rather than a collection of unrelated topics. They develop the central concepts of modern finance: arbitrage, net present value, efficient markets, agency theory, options, and the trade-off between risk and return, and use them to explain corporate finance with a balance of theory and application. The well-respected author team is known for their clear, accessible presentation of material that makes this text an excellent teaching tool.

Stephen Alan Ross was born in Boston, Massachusetts on February 3, 1944. He received a bachelor's degree in physics from the California Institute of Technology and a Ph.D. in economics from Harvard University. Before joining the M.I.T. Sloan School of Management faculty, he taught at the Wharton School at the University of Pennsylvania and at Yale University. He was a seminal theorist whose worked for over three decades to reshape the field of financial economics. He was best known for developing what is called the arbitrage pricing theory. He also created the term agency theory and pioneered what is known as the binomial model for pricing stock options. He wrote more than 100 articles about finance and economics and was the co-author of the textbook Corporate Finance. He received numerous awards including the Jean-Jacques Laffont Prize from the Toulouse School of Economics in 2007 and the Deutsche Bank Prize in Financial Economics in 2015. He died from sudden cardiac arrest on March 3, 2017 at the age of 73.

Randoloph W. Westerfield is Dean of the Marshall School of Business at University of Southern California and holder of the Robert R. Dockson Dean's Chair of Business Administration. From 1988 to 1993, Professor Westerfield served as the chairman of the School's finance and business economics department and the Charles B. Thornton Professor of Finance. He came to USC from The Wharton School, University of Pennsylvania, where he was the chairman of the finance department and member of the finance faculty for 20 years. His areas of expertise include corporate financial policy, investment management and analysis, mergers and acquisitions, and stock market price behavior. Professor Westerfield has served as a member of the Continental Bank trust committee, supervising all activities of the trust department. He has been consultant to a number of corporations, including AT&T, Mobil Oil and Pacific Enterprises, as well as to the United Nations, the U.S. Department of Justice and Labor, and the State of California.
No Review Found