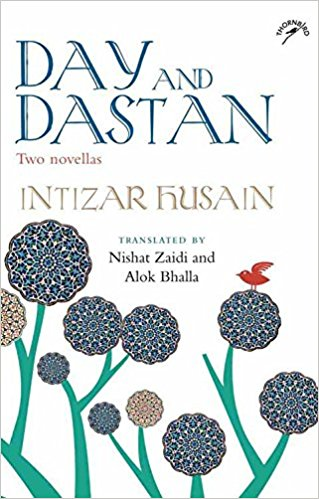 Intizar Husain is the finest writer of Urdu prose and the most brilliant story-teller of the post-partition generation. The two novellas, Day and Dastan (Din Aur Dastan), his favourite texts, show his versatility and fictional inventiveness. Day, a realistic story, is a meditation on the cruellest of events to have scarred our times – migrations. When people are forced to move to new homes or new geographies, they only recall a mix of uncanny facts, streets lost in sad nostalgias, fantasies of lovers, parables of simple things, or an unending romance about a possible life and a world. When physical geographies are redrawn, moral landscapes become so bewildering as to leave one emotionally paralysed. As in Intizar Husain’s other work, India’s partition haunts the tale like an inexplicable shadow. In contrast, Dastan is a traditional tale of wonder. Its language is lyrical and exaggerated; its narrative, obsessed with action, weaves dreams and adventure, heroism and mercy, beauty and love, magic and grace. It is located in another time of turmoil and uncertainty when mysterious forces cause havoc in nature and societies rise up suddenly to avenge old wrongs. The 1857 war of independence is prophesied by a mysterious faqir; rivers suddenly break their banks; an old haveli is left desolate; a princess weeps beside a fountain; a parrot shows a soldier the road to take; and hope of political change is fatally lost. Intizar Husain is neither a social critic nor a preacher; he is a story-teller – a supreme one.

Late Intizar Husain was born in Dibai, India in 1925, and migrated to Pakistan in 1947. His published works include seven collections of short stories, five novels, nine plays, travelogue, and essays in Urdu and English. His work has been translated into many of the world languages. He was the recipient of many literary awards, his novel Basti was short- listed for the Man Booker International prize in 2013. In 2012, he was given the Lifetime Achievement Award at the Lahore Literary Festival, and in 2014, he was conferred the French Officer de L Odre des Arts et des Letters. He passed away in 2016.
No Review Found