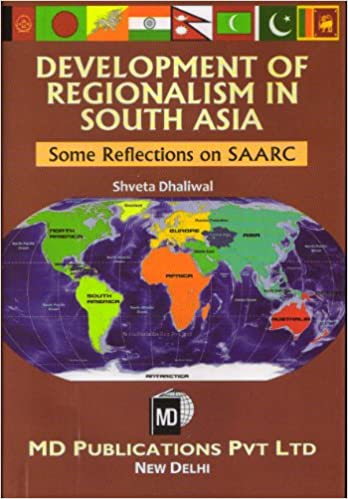 DEVELOPMENT OF REGIONALISM IN SOUTH ASIA : SOME REFLECTIONS ON SAARC

This book is a modest attempt to trace the history of regionalism at international level and to bring out its importance. After given a short description of the regional arrangements all over the world, the book focuses on South Asia (Afghanistan, Bangladesh, Bhutan, India, Maldives, Nepal, Pakistan, Sri Lanka) and the regional organization representing it, the South Asian Association for Regional Cooperation i.e. SAARC.

The book focuses on SAARC, its origin and organization and also gives a detailed description of all the Declarations of SAARC Summit so that for further research these original documents could be made available in texts. The author has given special emphasis to the Social Charter of SAARC and has tried to bring out its importance. The book gives an account of the problems of SAARC and South Asia. This book concludes with some hope and future prospects of regional cooperation and economic integration.

Shveta Dhaliwal has done her Master’s in Political Science in 2000 and Master’s in English in 2002 from Guru Nanak Dev University, Amritsar. She is UGC (NET) qualified in Political Science and has also qualified in Political Science and has also done her M Phil in International Relations from Himachal Pradesh University in 2006. She is presently doing her inter-disciplinary Doctorate in Regional Human Rights Mechanism in South Asia: A Politico – Legal Perspective. She has a number of research paper to her credit. She has gained a lot from her participations in International and National Conferences and Seminars. She has been actively involved in teaching for the last ten years. She was selected by the Human Resource Development Ministry of India for the interview for PhD Scholarship in Commonwealth, UK, twice, in the year 2007 and 2008. Her area of interest is South Asia and Human Rights.
No Review Found