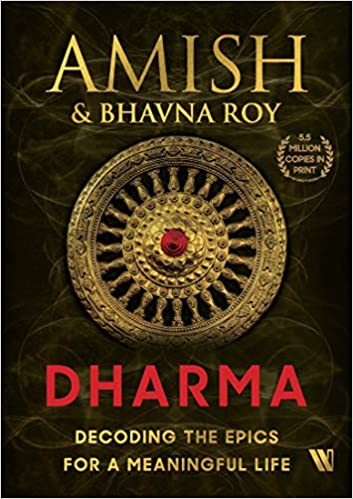 Dharma: Decoding the Epics for a Meaningful Life

Stories can be both entertaining and educative. They can also be insightful and illuminating, especially when they have travelled down the generations, through the centuries, taking on and eliding new meanings with each retelling. In this genre-bending book, the first of a series, Amish and Bhavna dive into the priceless treasure trove of the ancient Indian epics, as well as the vast and complex universe of Amish’s Meluha (through his Shiva Trilogy and Ram Chandra Series), to explore some of the key concepts of Indian philosophy.

What is the ideal interplay between thought and action, taking and giving, self-love and sacrifice? How can we tell right from wrong? What can we do to bring out the best in ourselves, and to live a life with purpose and meaning, not just one fuelled by the ego and material needs? The answers lie in these simple and wise interpretations of our favourite stories by a lovable cast of fictional characters who you’ll enjoy getting to know.

BHAVNA ROY was educated in Mussoorie, Pune and Mumbai. After graduating in psychology from Mumbai University, she worked first as a volunteer in a school for special children in Malegaon, and later in an NGO in Nashik called SOS. She is the wife of the late Himanshu Roy IPS, senior police officer of the Maharashtra cadre. She lives in Mumbai.
More from Author