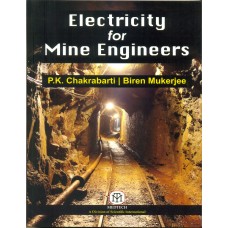 Electricity For Mine Engineers

Electricity performs an endless variety of tasks in our mining industry. It powers almost all of equipment that we encounter in a mine site. It powers mine winding machines, for carrying men and material from underground to surface, mine fans that takes away foul and explosive gases, from inside mines and keeps the mine atmosphere clean to workmen. The use of electrical power to the mining industry in phenomenal and the progress towards full electrification on mining activities cannot be over emphasized. Most of the site engineers associated with mining activities feel the need to know more about the application of electrical power at mines. The aim here is to deal with electricity exclusively form mining point of view and the treatment is necessarily brief. Materials are collected and collated from good many industrial sources, literatures and industrial research works which, the authors feel, will help mine engineers at site besides teaching staffs and research scholars of Institutions.

P.K. Chakrabarti graduate in 1961 from B.E College, Shibpur, Holder of 1st class Mine manager’s certificate of competency: worked as a mine Manager for a numbers of year 1968. He completed his PH.D. in mining machinery form Leningrad Mining institute, USSR in the year 1968. He served in various capacities in the design department of MAMC Ltd, during 1969-75 He join Central Mine Planning and Design Institute, Ranchi a subsidiary of Coal India Ltd. At CMPDI he headed a number of departments e.g. Specialist department looking after import of technology and mine mechanization, mine ventilation, rock testing and computer department. He has written forty technical publications on various subjects of mining machinery in various journals.

Biren Mukerjee completed his Masters from the Indian School of Mines, Dhanbad. He joined DGMS, Dhanbad as an inspector of Mines. He was instrumental in the study and evaluation of causes relating to the Mine disasters and recommending practical for the same. He later joined Kilburn & Co. (now known as McNeill & Magor) between 1959 to 1977 as General Manager (Minning).
No Review Found