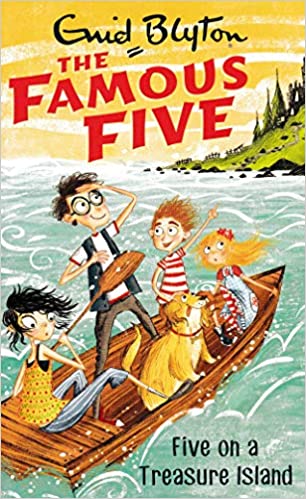 5
0%
0
4
0%
0
3
0%
0
2
0%
0
1
0%
0
Five On A Treasure Island is one of the books of Enid Blyton’s Famous Five series. The story follows the journeys of Dick, Julian, Anne, Georgina and their dog Timmy. Enid Blyton is one of the most read and adored children’s writers and the Famous Five is a series that won her a lot of accolades. Five On A Treasure Island begins when the children and Timmy are on their way to Kirrin Island. While on their way there, they encounter a shipwreck and George explains to the others that her great-great-great-grandfather was on that ship, and that there was a lot of gold in it. The ship was destroyed during a storm. George then explains how divers never found the treasure despite repeated attempts. The children agree that the treasure must have been hidden away in the island, and so they begin their search. While chasing a rabbit into a hole, Timmy gives the five a clue to the treasure. In the now accessible shipwreck they discover a box that looks more like a treasure box. Inside the box lies the map to the treasure, and the five enter the dungeons to explore and search for it. Beautifully written and conceived, Five On A Treasure Island is a great book for children to read. The first edition of the book was published in 2007 by Hodder Children’s Books, and is available in paperback.

Enid Blyton died in 1968 but remains one of the best-known and best-loved children's authors. The characters in her stories have been enjoyed for generations and she is consistently voted number one in children's favourite author polls. She has over 600 children's books to her credit, including series such as Malory Towers, St Clare's, The Faraway Tree, The Wishing-Chair and Famous Five.
No Review Found
More from Author