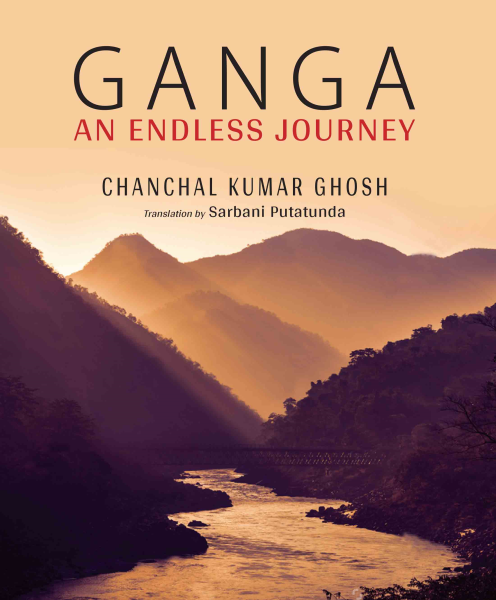 Ganga is the soul of India. The 2,500-km long river, originating from Gaumukh in the Himalayas and merging with the ocean at the confluence of Gangasagar, is the cradle of Indian civilisation. Innumerable cities, villages and temples have sprouted on its banks, converting the entire stretch into a pilgrimage.

Chanchal Kumar Ghosh has covered the length of its riverbanks during his epic journey across India. His insight has enabled him to perceive the pulsating spiritual existence of Indian culture, thriving gloriously down the ages on the banks of the Ganga. The people he has met and the stories he has heard have further enriched the narrative. His photographs have vividly captured the very essence of India’s culture and heritage. This visually resplendent book is a testimony to the intrinsic spirit of the. Ganga – the spirit of continuity, the spirit of love and reverence.

Born in Calcutta in 1960 and brought up in the industrial town of Durgapur, Chanchal Kumar Ghosh is a leading writer of Bengali fiction, travelogues and children’s literature. His debut novel Jagannath Tomake Pranam was very well received and won several awards. His other published Bengali novels include Prabaho and Chiriakhana. His latest novel is Amrita Pantha (2019) based on the life of the Chinese monk Hiuen Tsang (Xuanzang). He has also written the novel Tui Kichu Paris Na for children. Ghosh in addition has penned a number of short stories that have been translated into various Indian languages. An authority on literary and cultural studies relating to the Ganga, Ghosh has authored three important books on the holy river: Bharatatma Ganga published by the Ramakrishna Mission; Ganga Darsan (a pictorial book on the Ganga); and Pravahaman Ganga (Hindi).
No Review Found