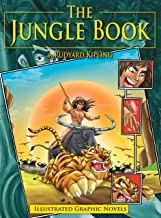 5
0%
0
4
0%
0
3
0%
0
2
0%
0
1
0%
0
Classic stories and fairy tales go hand in hand with a child’s growing up years. However, in this age of comic books, the classics are gradually finding less and less takers. Keeping this in mind we have selected 24 such all time favourite classics and translated them into graphic format. While remaining faithful to the original plot, these stories contain neat, pithy text and vivid, colourful graphics that make reading a pleasure.Children as well as adolescents will find this series to be a fascinating read, and it can help your child to make the ascension from cartoons to the classics.