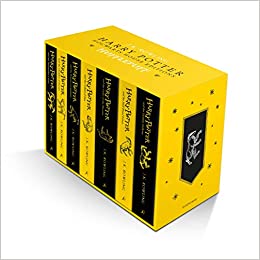 Celebrate all things Hufflepuff with this glorious paperback collection of the iconic House Editions. The beautifully crafted slipcase emblazoned with the house emblem the Hufflepuff badger contains all seven novels from J.K. Rowling's classic series in a spectacular alternating colour scheme, with cover artwork and illustrations by celebrated Kate Greenaway Medal winner Levi Pinfold.Home to those famed for their loyalty, Hufflepuff house has produced some of the most famous witches and wizards in history, including Hogwarts alumni Cedric Diggory and Auror Nymphadora Tonks. The seven lovingly designed covers are individually decorated with enchanting details that capture favourite house themes from each novel. Charming vignettes of the Hufflepuff badger in a series of playful poses across the seven book spines complete the decoration scheme. An exclusive colour bookmark depicting house ghost the Fat Friar makes for a highly collectable keepsake.The seven books in this collection are accompanied by a magical miscellany of exciting feature articles, quizzes and fascinating fact files packed with trivia about the history and alumni of Hufflepuff house - ideal to dip into and enjoy time and time again. More than twenty exclusive illustrations capture the magic of Hufflepuff house and favourite characters - Tonks, Cedric, Ernie Macmillan, Professor Sprout and many more .A must-have collection for Hufflepuffs young and old, this Hufflepuff House Editions box set is the perfect tribute to the house famed for its dedication, patience and loyalty and is sure to be treasured for years to come.