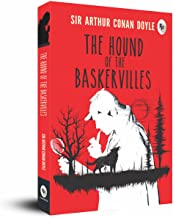 5
0%
0
4
0%
0
3
0%
0
2
0%
0
1
0%
0
â€œThe world is full of obvious things which nobody by any chance ever observes.â€ found dead on the grounds of his estate with a horrifying expression on his face, Sir Charles Baskerville is suspected to have had a heart attack. But Dr. James Mortimer, Charlesâ€™ friend and medical Attendant, is Unconvinced and suspicious. As the legend has it, the Baskerville family has been plagued by a gigantic hound since the Civil War era, and Dr. Mortimer observed footprints of a similar creature a little distance off the body. As he reaches out to Sherlock Holmes, worried about the safety of the only heir, Sir Henry Baskerville, how will Holmes unravel the mystery and save Henry from the evil fate? Gripping and iconic, the hound of the Baskervilles is one of the finest stories ever written. It has been adapted for film and television time and again. More than a century after its first publication, the novel continues to remain a spine-chilling classic.