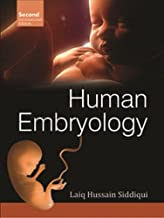 Human Embryology has been written with an intent to make the subject of embryology easily understandable for the medical and dental students. To make this otherwise dreary subject interesting, explanation of the intricate developmental processes has been presented in a plain and palatable manner. Description of the normal development of organs / organ systems is supplemented by an account of the clinical correlates including the major congenital anomalies of the concerned organs / organ systems. Molecular regulation of development has been described in a very simplified way which makes this newly introduced yet tedious component of embryology easily comprehensible for the students. This book contains more than 500 colour illustrations, sketches and diagrams which facilitate and augment comprehension of the text material.