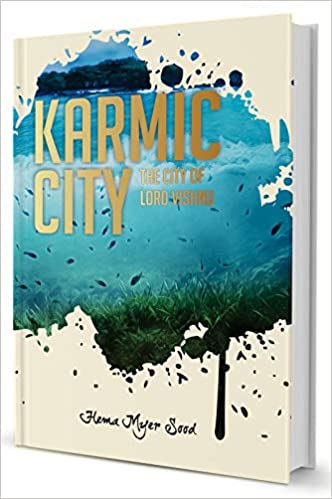 He explained, “Arjuna’s egoistic evaluation of himself as the greatest warrior was being put to test by this fratricidal war. To keep his honour and prestige intact, he was anxious to attain a victorious outcome. When he saw the vast Kaurava army, Arjuna feared defeat since their army was considerably smaller. He mistakenly assessed the fratricidal war wherein he desired a personal victory to establish his supremacy in that era as the greatest archer. He perceived himself: a single ego, fighting with other individual egos. He forgot the all-important dictum that it was one army fighting another one, wherein the cause was a glorious one since Lord Krishna sought to redress the skewed balance between Dharma and Adharma.” “In this war, neither was personal egos being assessed nor were personal issues to be sorted out. Everyone had to temporarily lose his or her egoistic individuality and merge to form one army. There are many different facets of Arjuna’s despondency. Lord Krishna silently heard every logical and convincing argument put forward by Arjuna. Arjuna was confused by Lord Krishna’s unflinching silence. The mental crisis that besieged the powerful personality of Arjuna completely transformed him. He portrayed a bewildered and confused personality, overcome with grief at the thought of committing the felonious sin of killing his clan. He loses his basic self-confidence as his traumatized nerves denounce the occurrence of a fratricidal war. His neurotic mental condition portrays a restless mind which involuntarily seeks the human frailty of escapism.” “Diverse complicated situations that life offers to us, continually is subtly comparable to a conflict on the battlefield. When you delve deeply into the subtle nuances of Lord Krishna’s philosophy, you may find yourself caught in a moral battle between Dharma and Adharma, which often strain familial relations. We have to accept every external crisis as an occasion to enhance our inner life.

Hema Myer Sood released her first book at 29 - The Eternal Ocean of Brahma (Indmark Publishers 1994). The book revealed the esoteric wisdom that she imbibed through intuitive perceptions of the ocean. The waves of the ocean imparted the profound wisdom of the Bhagavad Geetha. The book received highly acclaimed reviews that compared her to Newton and Archimedes for her enlightening perceptions. Lord Krishnaâ€™s Cosmic Drama (1996), and The Revelation on Shivarathri Night (1998) was released by Bharat Ratna Shri C. Subramaniam. Two decades later, The Karmic City trilogy was released in the genre of New Age Philosophy. The Foreword of the Karmic City trilogy is written by the well-known erudite Maharaja Dr. Karan Singh. The Karmic City: The City of Lord Brahma (April 2015) portrays profound insights of ancient Indian philosophy, interspersed with mystical poetry. Karmic City: The City of Lord Vishnu was released at the Goa Arts and Literary Festival (December 2015) and received wide acclaim in the print media. Karmic Cords is a poignant narrative of the authorâ€™s loss of her only sibling. An IITian, at 31 he created the world's first mortgage website in 1992 at San Jose, USA. Karmic Cords was released at the Goa Arts and Literary Festival (December 2016) by Padmashri Laxman Pai. The third book of the trilogy- Karmic City: The City of Lord Shiva was released at the Gurgaon Literary Festival on 17th November 2019 by her cousin Mr. Aman Nath. Her eighth book is a historical thriller interwoven with clairvoyance and telepathy. The Crown of Tijara portrays three timelines that are set apart by centuries, even millennia, yet inextricably linked by an ancient secret of the mystical Amritha. This murder mystery will be released in 2020. Hema lives in Goa. She is a Director at Express Machines and Scaffoldings since 1991. She is a certified Reiki Grandmaster, a psychic medium and practices channelling.
No Review Found
More from Author