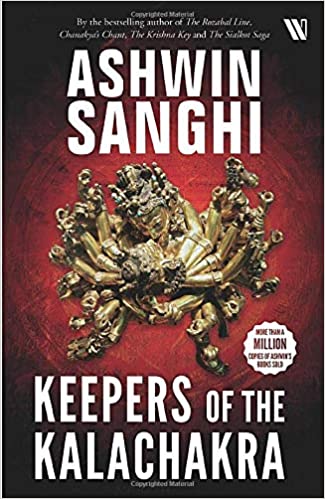 Keepers of the Kalachakra

A seemingly random selection of heads of state are struck down by unnamed killers, who work with the clinical efficiency of butchers, and leave no trace of their methods. Welcome bact to the shadowy and addictive world of Ashwin sanghi. In this fearsome tale, sanghi paints a world of people at war with one another in a boomeranging conflict of faiths.Caught in this madness is Vijay Sundram, a geek scientist who is only dimly aware that the world outside his laboratory is about to be savagely torn appart. Events conspire to propel Vijay into the labyrinth of Milesian Labs, a reserch facility deep in the forests of Uttrakhand. What he stumbles upon is a primordial clue to a galactic secret the could accelerated the downward spiral of humankind. Trapped and wholly unawared of his actual foe. Vijay races against time to save humanity - and himself. Zigzagging from Rams's crossing to Lanka to the Brith of Buddhism: from the origin of wahhabism to the gravitational wave - detectors of LIGO: from the charnel - grounds of tantric practitioners ot the bespoke suits of the Oval Office: and from the frankincense - shrouded rites of Minerva to the dark ruins of Nalanda, Keepers of the kalachakra is a  journey that will have yu gasping for breath  - but one that you cannot abandon till all pieces of the jigsaw come together. And you come up gobsmack against an end that you simply did not see coming.

Ashwin was included by Forbes India in their Celebrity 100 and is a winner of the Crossword Popular Choice award. He was educated at Cathedral & John Connon School, Mumbai, and St Xavier’s College, Mumbai. He holds an MBA from Yale University. Ashwin Sanghi lives in Mumbai with his wife, Anushika, and his son, Raghuvir.