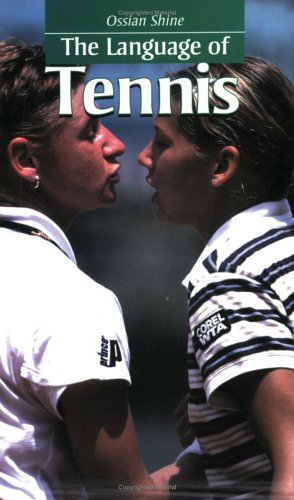 Bagels, slices, open throats and chokers. Tennis terminology can be, at best, confusing and frequently simply bewildering to all but the most devoted of followers. Scratching beneath the surface, The Language of Tennis investigates and explains the origins of the sport's teminology, from it's genteel beginnings in the late 19th Century to it's multi-million dollar status today. Ossian Shine has compiled a rare dictionary drawing from the history and pre-history of the game as we know it. The modern game was developed in 1874 as a way to bring Real Tennis - a pastime requiring costly equipment - to the masses. Real Tennis itself has roots in the game of Jeu du Paume me which dates back to the fourteenth century. Shine's word list of 300 terms centres on the modern game, but its past keeps breaking through. The first attestation for deuce, for example, is 1598. Other words are of fresher growth. A seed, a player who has been seeded in a tournament draw, derives from the now obsolete sense of the verb "to seed", to stock with inhabitants. Sphairistike is the name Major Walter Clopton Wingfield chose to describe the game of lawn tennis when he applied, in 1874, to patent his "New and Improved Court for Playing the Ancient Game of Tennis". From the Greek "sphaira": ball. Wingfield quickly grew tired of the way the name was being abbreviated to "Sticky" and deemed "Lawn Tennis" are more appropriate description for his game. This is a book for anyone who has ever wondered from where did the sport get its name? Why is a player who has won nothing awarded a score of "love", and how can someone who has played "junk" prevail? These and hundreds more mysteries are revealed in "The Language of Tennis".

Ossian Shine indulges a lifelong passion for tennis in his role as international tennis editor for Reuters, the global news agency. At one time a junior county player, representing Hampshire, his nascent career came to an abrupt end at the age of eighteen when the realisation he was not going to be Britain's first Wimbledon champion since 1936 became only too clear and he was lured into the world of journalism. Several years reporting from events as diverse as the Olympic Games to the Bosnian War culminated in move from the provincial press to Fleet Street and into tennis. Ossian now attends the events he dreamed of as a youngster; the hallowed lawns of Wimbledon, the chic grounds of Roland Garros in Paris, Melbourne's laid back grand slam and the hothouse of New York's Flushing Meadows. His work appears in major newspapers and magazines around the world.
No Review Found