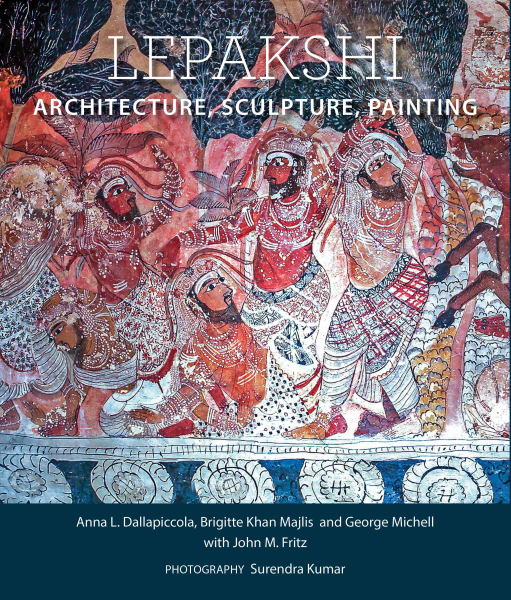 Hidden away in the remote village of Lepakshi in the Rayalaseema region of Andhra Pradesh, merely a couple of hours drive from Bengaluru, is one of the most spectacular Vijayanagara temples. Unlike so many other religious monuments of the period that have suffered disfiguring additions, or have lost their original carvings and ceiling paintings, that at Lepakshi dedicated to Virabhadra, a fierce emanation of Shiva, is miraculously intact. Its architecture, sculptures and paintings showcase the finest artistic achievements in southern India during the first half of the sixteenth century.

While the remarkable qualities of Lepakshi have long been recognised, particularly its unique series of ceiling paintings, this volume is the first to provide the temple with a comprehensive description. It is authored by three eminent scholars: George Michell, who has focused on Vijayanagara temple architecture; Anna L. Dallapiccola, who has extensively researched the sculptural and painting traditions of southern India; and Brigitte Khan Majlis, an expert on Indian textile designs and techniques.

Professor Anna L. Dallapiccola has a Ph.D in Indian Art History and a Habilitation (D.Litt.) from University of Heidelberg, Germany. She was Professor of Indian Art at the South Asia Institute of Heidelberg University from 1971 to 1995 and then appointed as Honorary Professor at Edinburgh University in 1991. She lectures at the School of Oriental and African Studies, London. From 2000 to 2004 she was Visiting Professor at De Montfort University Leicester.

Among her latest publications are Catalogue of South Indian Paintings in the Collection of the British Museum (2010), The Great Platform at Vijayanagara (2010), Indian Painting: The Lesser Known Traditions (2011) and Kalamkari Temple Hangings, a study of the collection in the V&A (2015).

She has at present two concurrent research programmes in India, the first on the art of the Vijayanagara successor states and the second on the Virabhadra temple at Lepakshi.

Brigitte Khan Majlis is a specialist in Indian as well as Indonesian textiles. She is former curator of the Textile Department at the Rautenstrauch-Joest Museum–Cultures of the World in Cologne, Germany.

George Michell trained as an architect in Melbourne, and then obtained a PhD in Indian Archaeology at the School of Oriental and African Studies, University of London, with a dissertation on Early Chalukya temples. Since then he has undertaken numerous documentation and research projects, most recently with John M. Fritz at Hampi.
No Review Found
More from Author