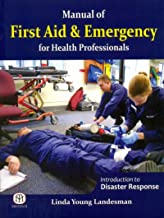 5
0%
0
4
0%
0
3
0%
0
2
0%
0
1
0%
0
What all allied health professional need  to know about emergency preparedness
Manual of First Aid & Emergency for Health Professionals is the first textbook that prepares health professionals for their important roles in disaster response.
• Discover how your professional skills can be applied in disaster response.
• Understand the impacts of disasters on public health and the healthcare system.
• Know how disaster responses are organized.
• Create a family emergency Plan.
• Learn about personal safety equipment and procedures.
• Cope with the stress of disaster response.
• Receive an orientation to emergency procedures at medical facilities and emergency sites.
• Meet the special needs of at-risk patients.
• Be ready to meet employers' expectations.
• Explore volunteer opportunities.
• Serve your community and nation.
• Become an effective, confident responder.

Linda Young Landesman, DrPH, MSW, is a national expert on the role of public health in disaster preparedness and response. She has authored and edited six books, including Public Health Management of Disasters: The Practice Guide, and has developed national standards for emergency medical services response. Dr. Landesman was the Principal Investigator for the first curriculum on the public health management of disasters, developed through a cooperative agreement with the Association of Schools of Public Health and sponsored by the Centers for Disease Control and Prevention. This curriculum is currently being used nationwide. Since 1996, Dr. Landesman has been an assistant vice president at the New York City Health and Hospitals Corporation. She has been appointed to the Weapons of Mass Destruction Committee of the N ew York City Department of Health and Mental Hygiene, the Advisory Committee of the Mailman School Center for Public Health Preparedness, the Advisory Committee of the Mailman School World Trade Center Evacuation study, and the Emergency Preparedness Council of the New York City Health and Hospitals Corporation. Dr. Landesman was appointed by the New York State Assembly to the Hudson Valley Regional Advisory Committee, Commission on Health Care Facilities in the 21st Century. In addition, she serves on the Commissioner Community Advisory Committee of the New York City Department .of Health and Mental Hygiene. Dr. Landesman is an elected member of the Executive Board of the American Public Health Association and has served on the editorial board of the American Journal of Public Health. Dr. Landesman earned her BA and MSW degrees from the University of Michigan and practiced clinical social work for 10 years. She received her DrPH in health policy and management from the Columbia School of Public Health. Her doctoral dissertation focused on hospital preparedness for chemical accidents and won the Doctoral Dissertation Award from the Health Services Improvement Fund in 1990. Dr. Landesman has had Faculty appointments at the New School, Albert Einstein College of Medicine and Mailman School of Public Health at Columbia University. She is now on the faculty of the Public Health Practice Program at the University of Massachusetts-Amherst, where she teaches public health emergency management online.
No Review Found