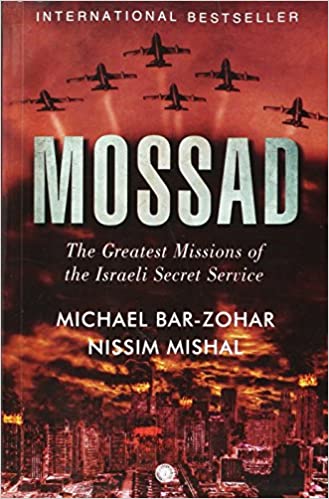 "This Book tells what should have been known and isn't - that israel's hidden force is as formidable as its recognized physical strength." - Former Israeli President Shimon Peres

For decades, Israel's renowned security arm, the Mossad, has been widely recognized as the best intelligence service in the world. In Mossad, authors Michael Bar - Zohar and Nissim Mishal take us behind the closed curtain with riventing, eye - opening, boots - on - the - ground accounts of the most dangerous, most crucial mission in the agency's 60- year history.

These are real, true mission: Impossible stories brimming with high - octane action - right from the breath - taking capture of Nazi executioner Adolph Eichmann to the recent elimination of the key Iranian nuclear scientists. If you are fascinated by the world of international espionage, intelligence, and covert "Black - Ops" warfare, then you will definitely find that the Mossad makes for some electrifying reading.

Michael Bar-Zohar has fought in four Israeli-Arab wars, spent nine years beside David Ben-Gurion, Israel’s founder, become a fervent supporter of peace between Israel and her neighbours and served two terms in Parliament. He has written over 30 books and also won several major awards for his screenplays.
No Review Found
More from Author