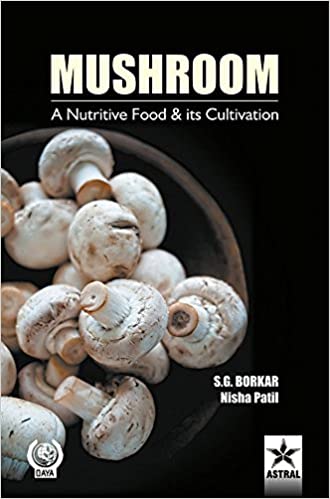 Mushroom: A Nutritive Food & its Cultivation

The book Mushroom: A Nutritive Food and its Cultivation encompasses 12 chapters which includes basic knowledge about mushroom and its structural morphology, their nutritional and medicinal values, types of edible mushroom which are commercially exploited and yet to be exploited. Most important chapter is on poisonous mushroom, their different types with characteristics and images, mushroom poisoning, clinical symptomology, mushroom toxins, symptomology based antidotes and management of mushroom poisoning. \nThose who want to trade in mushroom, global as well as national scenario of mushroom production and trade is given in separate chapter with further business opportunities. Similarly the medicines manufactured from mushroom are also described in the book for pharmaceuticals industries.\nThose who want to cultivate the mushroom for commercial purpose or for small scale or household purpose detailed knowledge about the mushroom farm design, spawn production technology and cultivation aspects and procedures of all the cultivated mushrooms are given in separate chapters in the book.\nMushroom diseases, competitive moulds and their management as well as post harvest handling, processing and preservation is given in detail in separate chapters.\nThe mushroom main course recipes particularly that of continental, Mexican, Italian, Chinese and Indian besides mushroom soups, snack, starters etc. are given in this book which will nutritionally enrich the homes with delicious food.'

Dr. Nisha Patil was born on 10th Sept, 1985 at Nagpur. She has completed her graduation from Dr. Punjabrao Deshmukh Krishi Vidyapeeth, College of Agriculture, Nagpur in 2008 and post graduation from University of Agriculture Sciences, Dharwad, Karnataka in the subject Agriculture Microbiology in 2010 and Ph. D. from Mahatma Phule Krishi Vidyapeeth, Rahuri in 2013 under the supervision of Prof. S.G. Borkar. She work on the use of rooting inducing microbes in Agriculture and identified the rooting inducing microbes which can replace the use of plant growth hormones in MS media. Her areas of interest is in microbiology, tissue culture, molecular genetics and biotechnology.
No Review Found