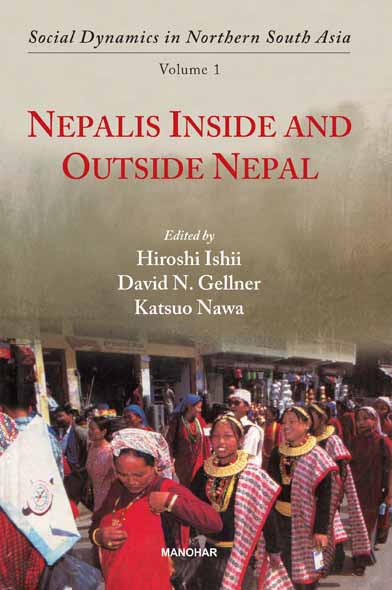 Nepalis Inside and Outside Nepal (Volume 1)

Situated in northern South Asia at the interface between different linguistic and cultural areas, Nepal contains huge ethnic, cultural, and socio-political diversity. At the same time, it has had to confront far-reaching social change in an ex­tremely compressed timescale.

This volume attempts to encompass these transformations and the resultant complexity through a series of in-depth case studies.

Part 2, ‘Marriage, Kinship, and Transformation of Intimacy’, covers questions of gender, social relations, marriage, drug use, and coping with the Maoist insurgency, in various parts of the country. In

Part 4 consists of one substantial chapter, `Nepal as Viewed from the Indian Himalayas’, in which Gerald Berreman makes a series of direct comparisons between the Indian and Nepalese Himalayas.

This is first of the two volumes entitled Social Dynamics in Northern South Asia. The volumes bring together scholars from Japan, Nepal, India, Europe, and America in order to deepen our understanding of social change in the region, on the basis of fresh fieldwork reports and new analyses.

Hiroshi Ishii is Professor Emeritus at the Research Institute for Languages and Cultures of Asia and Africa (ILCAA), Tokyo University of Foreign Studies. He has conducted anthropological research among the Newars, the Parbate Hindus, and the Maithils in Nepal since 1970.

David N. Gellner is Professor of Social Anthropology and a Fellow of All Souls College in the University of Oxford. He is the author or editor of many books on Nepal and Northern South Asia, including Vernacular Religion: Cultural Politics, Community Belonging, and Personal Practice in the UK’s Nepali Diaspora (Vajra, 2019), and a special issue of Contributions to Nepalese Studies 46.1: Nepali Dalits in Transition (CNAS, TU, 2019).

Katsuo Nawa is Associate Professor of Cultural Anthropology, Institute of Oriental Culture, the University of Tokyo. He is the author of An Ethnographic Study on Rituals and Social Categories of Byans, Nepal, and Adjacent Regions: Another Constellation of ‘Modernity’ (2002, in Japanese), which was awarded the 30th Shibusawa Prize.
No Review Found
More from Author