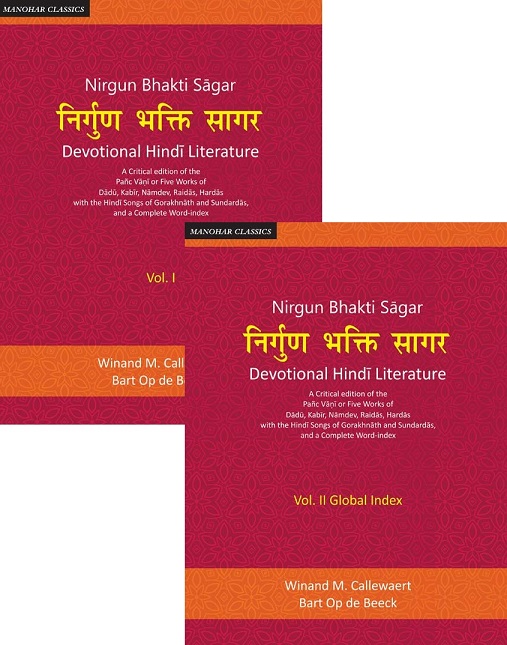 This book is a tribute to India’s literary and religious heritage. For the last 25 years Dr. Winand M. Callewaert visited scores of libraries, temples and private collections to study and catalogue manuscripts on Bhakti literature. As the years passed by his admiration increased for the great medieval Bhaktas who meditated and sang. The result of their devotion is preserved in thousands of manuscripts. In order to make that treasure easily accessible to scholars and devotees these two volumes were produced with the help of computer facilities for printing and sorting words in alphabetical order.

The basis for selection is the famous Rajasthani Pancavani collection of the works of five great Bhaktas: Dadu, Kabir, Namdev, Raidas and Hardas. In order to make a comparison possible, the authors have also included the Bijak of Kabir, the ‘Hindi’ songs of Gorakhnath and Sundardas, and a selection of Siddha literature. Permission given to reproduce a few edited texts now not easily available is grate­fully acknowledged. The present work thus gives a representative selection of the most popular Pads and Sakhis around ad 1600 in north-west India.

There are several useful ways to consult this work. One can read and sing, and look for parallel passages in the Vani of another Bhakta. Or one can use the Word-Index to trace difficult words not found in any dictionary. In the pioneering field of research on Bhakti literature it has been experienced that it is less difficult to translate obscure passages if one has access to parallel lines in another Vani. Research in linguistics can be carried out much further than is suggested in the Introduction, where the results of a computer count are given. From that brief analysis interesting conclusions have been drawn about the choice of vocabulary, for the Sakhis and the Pads, and about the vast number of different words used by the Bhaktas.

Bart Op de Beeck (born 1960) has earlier worked as a Research Assistant at the Department of Oriental Studies, Leuven. He is now working in the Royal Library, Brussels, as a specialist in manuscripts and rare works.

Winand M. Callewaert (born 1943), Dept. to Oriental Studies. Leuven, Belgium has been studying and working in India since 1965. He holds degrees in Hindi, Sanskrit and Philosophy from Ranchi, Benares and Leuven. He has published four books in Dutch and nine in English, mainly on Bhakti literature (Rajab, Dadu, Namdev). With the collaboration of many scholars and devotees in India he has made an outstanding collection containing the oldest available manuscripts of Sant literature on microfilm.
No Review Found