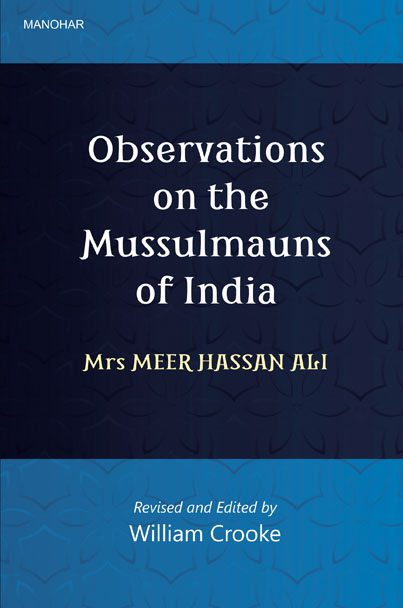 Observations on the Mussulmauns of India

It is a record of the first hand experiences of an English lady who occupied the exceptional position of membership of a Mussulman family. She does not tell anything of her own friends in Lucknow, but she had free access to the houses of respectable Sayyids, and thus gained ample facilities for the study of the manners and customs of Mussulman families. Much of her information on Islam was obtained from her husband and his father, both learned, travelled gentlemen, and by them she was treated with a degree of toleration then unusual in a conservative Shiah household. Her accounts of the religious feasts and fasts, description of the marriage ceremonies and that of a surrounding native household are, according to William Crooke, ‘trustworthy and valuable’.

Not much was known about the author till Crooke surveyed massive literature in India and England, to give some background of the versatile lady. In the present edition the text of the original edition (1917) has been reproduced without change, even the curious transliterations of the ver­nacular words and phrases having been preserved. The correct forms of these, so far as they have been ascertained, have been given by Crooke in his notes and a new index glossary. He has also added an introduction containing an account of the author and compiled some notes illustrating questions connected with Islam and Mussulman usages.

The book is full of colourful descriptions of the life of Lucknow of those days but that is not its exclusive concern. We get useful accounts of the state of affairs in Delhi and Kannoge (Kannauj) and her experiences during the travel to Calcutta via Patna. It is invaluable for any student of Indian Islamic history and sociology.

William Crooke (1848-1923) was a British orientalist and a key figure in the study and documentation of Anglo-Indian folklore. He joined the Indian Civil Service. While an administrator in India, he found abundant material for his researches in the ancient civilizations of the country. He found ample time to write much on the people of India, their religions, beliefs and customs. He was also an accomplished hunter. He has several landmark publications to his credit.
No Review Found
More from Author