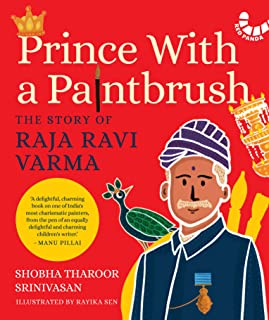 Painter with a Paintbrush:The Story of Raja Ravi Varma

When other kids were busy playing hopscotch with friends, seven-year-old Ravi Varma was painting on the walls of his house. Spotting his nephew’s artistic talent, his uncle Rajaraja Varma took him to the court of the Maharaja of Travancore to study and practice art. The rest, they say, is history. Known as the father of modern Indian art, Raja Ravi Varma wowed the world with paintings that adapted European art techniques like realism to create an entirely local expression. It is his art that gives Hindu gods their most popular imagery, seen today in calendar art and posters. He also established the first lithographic press in India, which created prints of his mythology-inspired paintings, in particular scenes from the Mahabharata and Ramayana. It was a big step towards making art affordable for everyone. This magnificently illustrated biography will help young readers discover the life and works of Raja Ravi Varma, the artist who was born into royalty but earned the title of ‘Raja’ for his creativity on canvas.

Shobha Tharoor Srinivasan is a children’s author, poet, translator, editor and voice-over talent. She is also a former non-profit development professional who spent two decades as an advocate and fundraiser for persons with disabilities. Shobha has done voice-work for documentaries, educational programs, journalistic initiatives and audiobooks. She has published children’s books in India and the United States, including A Pie Surprise and Other Stories(DC/Mango Books), the award-winning Indi-Alphabet (Mango and Marigold), and most recently How Many Lines in a Limerick? (Clear Fork Publishing). Shobha’s work has been anthologised by Tulika Books, Solstice and Skipping Stones. Essays and reviews have been published in India Currents and Scroll.in. Rayika Sen, a graduate from Srishti School of Art, Design and Technology, is a toy designer, illustrator and storyteller who specialises in designing content for children. Great Lives: Ruskin Bond, Scholastic Book of Hindu Gods and Goddesses, Samay Ka Khatola by Gulzar, The Dragon’s Toothache and I Am Not Afraid are some of the books that Rayika has illustrated. She has also created several craft books, including the Cool Crafts series. Her works have been published in Creative Gaga magazine and Deccan Herald newspaper, and also featured in international forums like the Bologna Children’s Book Fair and AFCC, Singapore.
No Review Found