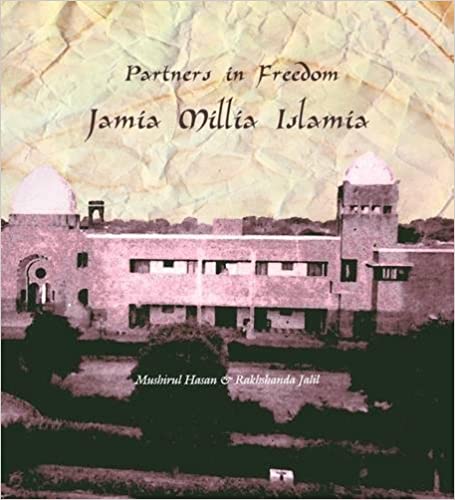 5
0%
0
4
0%
0
3
0%
0
2
0%
0
1
0%
0
Partners in Freedom: Jamia Millia Islamia, endeavours to unfurl the nationalist legacy of Jamia, locate its story in the larger context of Indiaâ€™s anti-colonial struggle, and profiles the lives of dedicated men and women who were committed to the ideas of plural nationhood and composite culture. When words do not suffice, rare, never-seen-before photographs relay the narrative. These are eloquent in their testimony of Jamiaâ€™s role in national life and the long and tortuous journey it has undertaken and emerged victorious. Partners in Freedom: Jamia Millia Islamia, an extensively researched book, is a history of tolerance, camaraderie and enlightenment within the precincts of an educational institution. It illustrates how individuals lived for and worked towards the attainment of high ideals and principles.

Rakhshanda Jalil writes on issues of literature, culture and heritage. She has published over 15 books, which includes two edited collections of short stories, Urdu Stories and a selection by Pakistani women called Neither Night Nor Day; two co-authored books with Mushirul Hasan, Partners in Freedom: Jamia Millia Islamia (Niyogi Books, 2006). She was co-editor of Third Frame, a journal devoted to literature, culture and society brought out by the Cambridge University Press. She has published six works of translations; the latest being Naked Voices & Other Stories by Saadat Hasan Manto; Panchlight and Other Stories by Hindi writer Phanishwarnath Renu. She runs an organization called Hindustani Awaz, devoted to the popularization of Hindi-Urdu literature and culture.

Late Professor Mushirul Hasan was an internationally renowned historian, prolific author and former Vice-Chancellor of Jamia Millia Islamia, New Delhi. He is presently the Director-General of the National Archives of India. Professor Hasan has published books on Indiaâ€™s Partition, on communalism, and on the histories of Islam in South Asia. He has authored Partners in Freedom: Jamia Millia Islamia (2006); The Avadh Punch: Wit and Humour in Colonial North India (2007) and Wit and Wisdom: Pickings from the Parsee Punch (2012); and edited Mutiny Memoirs (2009); Sarojini Naidu: Her Way with Words (2012). He was also editor of the ongoing multi-volume history of the Indian National Congress, brought out by Niyogi Books starting in 2012.
No Review Found
More from Author