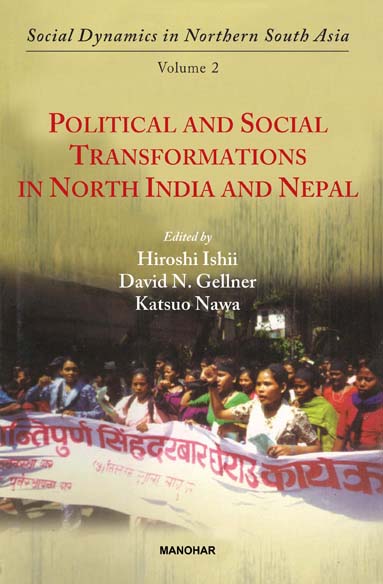 Political and Social Transformations in North India and Nepal (Volume 2)

This volume analyses the dynamics of social categories, group identities, and social and political movements in the region.Part 1 examines political and social processes, focusing on the different ways in which the rise of previously subordinate castes has changed the practical and normative bases of local life. In Part 2 four contrasting chapters bring new perspectives, insights, and materials to bear on communal conflict and the rise of Hindu nationalism in India and on religious and ritual change in Nepal. Part 3 deals with various forms of activism including Bengalis in Delhi, movements of bonded agricultural labourers, ethnic groups, anti-dam movements, and the social basis of Maoism in Nepal. Part 4 consists of an `Afterword` by Jonathan Parry analysing the changing significance of caste in the region.

This is second of the two volumes jointly entitled Social Dynamics in Northern South Asia. They bring together scholars from Japan, Nepal, India, Europe, and America in order to deepen our understanding of social change in the region, on the basis of fresh fieldwork reports and new analyses.

Hiroshi Ishii is Professor Emeritus at the Research Institute for Languages and Cultures of Asia and Africa (ILCAA), Tokyo University of Foreign Studies. He has conducted anthropological research among the Newars, the Parbate Hindus, and the Maithils in Nepal since 1970.

David N. Gellner is Professor of Social Anthropology and a Fellow of All Souls College in the University of Oxford. He is the author or editor of many books on Nepal and Northern South Asia, including Vernacular Religion: Cultural Politics, Community Belonging, and Personal Practice in the UK’s Nepali Diaspora (Vajra, 2019), and a special issue of Contributions to Nepalese Studies 46.1: Nepali Dalits in Transition (CNAS, TU, 2019).

Katsuo Nawa is Associate Professor of Cultural Anthropology, Institute of Oriental Culture, the University of Tokyo. He is the author of An Ethnographic Study on Rituals and Social Categories of Byans, Nepal, and Adjacent Regions: Another Constellation of ‘Modernity’ (2002, in Japanese), which was awarded the 30th Shibusawa Prize.
No Review Found
More from Author