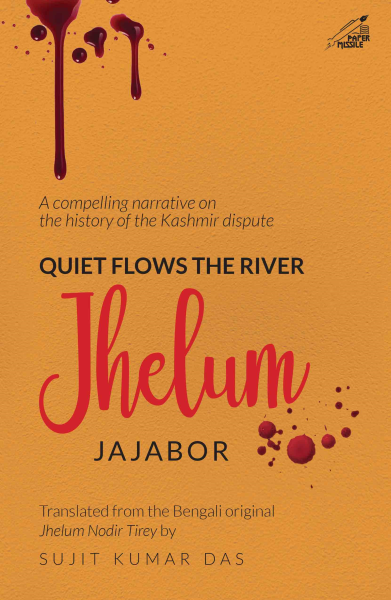 Quiet Flows the River Jhelum (Jhelum Nodir Tirey) recounts the thrilling tale of how the erstwhile princely state of Jammu & Kashmir acceded to India, under the threat of invasion by Pakistan-supported troops. The role of leaders and administrators such as Lord Mountbatten, Pandit Nehru, Sardar Vallabhbhai Patel, Mohammed Ali Jinnah, and Maharaja Hari Singh, the last King of Jammu and Kashmir, as well as the political, military, and social issues of the time are lucidly narrated by the author. Highlighting the heroism of brave warriors, such as Lt. Col. Ranjit Rai, Brigadier L.P. Sen, Brigadier Osman, and Major Somnath Sharma, the author describes how the Indian Army and Air Force were able to thwart the Pakistani invasion of 1947–48. This book takes you back to a tumultuous time in modern Indian history and sheds light on the causes of the Kashmir issue. Succinctly depicting political manoeuvring, palace intrigue, and valiant battle tactics, the critically acclaimed Bengali original is presented to a wider audience in this contemporary English translation.

â€˜Jajaborâ€™ was the pen name of the author Binoy Mukhopadhyay (1909â€“2002). Born in East Bengal (presently Bangladesh), he completed his Masters in Commerce from Calcutta University. He started his career as a journalist in a number of Bengali dailies, and subsequently joined the Ministry of Information and Broadcasting. He was the Deputy Secretary of the British Press Information Bureau when his first novel Drishtipath (1946) burst into the literary scene to the wide acclaim of the readers. It was followed by several other novels, short stories, essays and dramas, including Janantik and Laghukaran. He has also written two books on cricket, which was another of his passions besides Rabindra Sangeet. Jhelum Nodir Tirey, a politico-historical narrative on the transfer of power in Kashmir was published in May 1954.
No Review Found