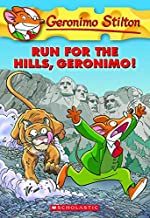 Run for the Hills Geronimo: 47

5
0%
0
4
0%
0
3
0%
0
2
0%
0
1
0%
0
In Run for The Hills Geronimo: 47 (Geronimo Stilton) Geronimo has planned a fun and exciting vacation away from the stress of work and the nagging of family. He plans to travel in style, as he has booked a seat in first class on a plane flying to South Dakota. As he waits, he envisions himself in a luxurious hotel, lazing around in the comfort of a cozy bed, with not a single soul to disturb him. Finally, the time comes and he arrives at the airport. A major shock awaits him. His first class ticket has been downgraded to a seat in :Dirt Cheap Airlines". Adding to his shock, he finds the on the flight happen to be his family - grinning away suspiciously. Did they play a hand in all of this?Perplexed by the sudden change of events, he strives on the hope of reaching his destination and getting back to the holiday he has planned for himself. However, sitting beside him, are Trap, Thea, Benjamin and Grandfather William Shortpaws. Even his friends, Bruce Hyena, Petunia Pretty Paws and her niece, Bugsy Wugsy have found their way to Geronimo.During the flight, Geronimo learns that Trap has set up a treasure hunting activity for the whole family. So, they all reach Black Island and the hunt begins. Their quest takes them to several exciting places such as Mount Rushmore and Devil's Tower, among others. But things do not stay smooth for too long, as Geronimo finds himself battling cougars and flying in a hot air balloon.Along the way, young readers will learn interesting facts about the places in Geronimo's quest. The cartoon illustrations add humor to the book, ensuring a fun and informative read. Run for The Hills Geronimo: 47 (Geronimo Stilton) was published by Scholastic Incorporated as original edition in the year 2011 and is available in paperback.