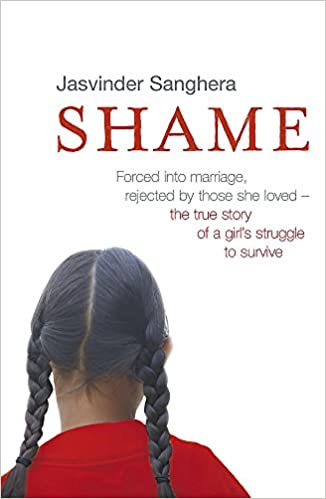 SHAME is the heart-rending true story of a young girl's escape from a nightmare. Overwhelmed and alone, Jasvinder was 15 when she ran away from home to escape a forced marriage to a much older man she'd never met. She had to move constantly, ever wary of being tracked down for betraying her family's honour.

Her three years in hiding ended with the news that her sister Robina had committed suicide by setting herself alight - because she was being so badly abused by her husband. At the funeral the family ostracised Jasvinder and twenty years later, her sisters still refuse to speak to her.

Jasvinder has since educated herself, become a parent and founded a shelter for women fleeing their families in similar circumstances - and in many cases, fearful for their lives. Even today, she still receieves threats on the lives of her children from the families of the women she cares for. This is her story.

Jasvinder Sanghera CBE was born and brought up in Derby. A survivor of a forced marriage, she is the co-founder of Karma Nirvana, a national project that supports both men and women affected by honour-based crimes and forced marriages. Jasvinder is also an international speaker and a Leading Expert Advisor to the Courts in child and criminal proceedings. Her memoir SHAME was a Sunday Times Top 10 Bestseller. Jasvinder has brought the issue of forced marriage into the public eye and helped the Forced Marriage bill go through Parliament. She has won numerous awards for her work including a Metropolitan Police GG2 Diversity Award in 2005. In 2007 she received one of the prestigious Women of the Year awards. Jasvinder was made an Honorary Doctor of the University of Derby in 2008. She was awarded a Pride of Britain Award in 2009 and was named a Cosmopolitan Ultimate Woman of the Year in 2010. In 2011 the Guardian listed Jasvinder amongst the top 100 inspirational women in the world.
No Review Found